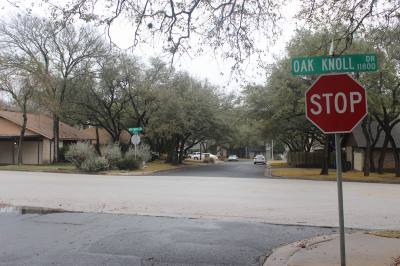 To address frequent flooding in the Oak Knoll neighborhood of Northwest Austin, the city of Austin Watershed Protection Department has developed a preliminary engineering report with potential mitigation plans.

The proposed project on Oak Knoll Drive and surrounding streets near U.S. 183 and Jollyville Road will include adding pipes, storm drains and a detention pond. City staffers will present the proposal to the public at 7 p.m. Feb. 27 at the Spicewood Springs Branch Library, 8637 Spicewood Springs Road, Austin.

Parts of Northwest Austin have long been plagued with flooding, but mitigation efforts are now a focal point of the latest draft of CodeNEXT, Austin’s land development code rewrite, according to a press release from the Watershed Department.

“Draft 3 of CodeNEXT includes requirements for both new developments and redevelopments to include green stormwater solutions, such as rain gardens, rainwater harvesting and porous pavement,” the release stated.