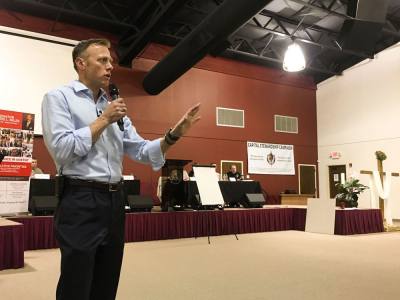 A panel of representatives from the Texas Commission on Environmental Quality and Texas Railroad Commission stated a recent oil well blowout should pose no risk to long-term health and groundwater at a town hall meeting hosted Tuesday by Senator Borris Miles, D-Houston, in Missouri City.

The incident in question took place Dec. 6 near the Fort Bend Parkway Tollway and McHard Road.

A drill operator from oil company IWR Operating LLC hit an unexpected pocket of oil at approximately 2,840 feet below ground, releasing pressurized gas and causing oil to spew out of the pipe—similar to opening a can of soda after shaking it, Texas Railroad Commissioner Ryan Sitton said.

Drill operators failed to activate blowout preventers, and the oil continued to leak for several hours, spilling about 3,000 barrels of oil and going as far as 500 feet away, he said. The blowout sealed by itself within 24 hours, and professionals plugged the leak with cement Dec. 19.

In this blowout situation, an individual may experience two types of smells caused by oil or hydrogen sulfide, he said.

“The one we’re more concerned about is hydrogen sulfide,” he said.

The Texas Commission on Environmental Quality deployed a team to investigate and monitor air pollutants in the affected area after its emergency response team determined it was an air quality issue, TCEQ program coordinator Kevin McLeod said.

“Overall, apart from one 30-minute period in one day, the measurements that we took were below the detectable levels of the instrument,” Chism said.

The Occupational Safety and Health Administration’s general industry standards dictate exposure to hydrogen sulfide should not exceed 20 parts per million.

Concentration of chemicals in soil are typically measured in the mass of the chemical expressed in milligrams per mass of soil expressed in kilogram—parts per million, according to the Center for Hazardous Substance Research. For soil, one part per million equals one milligram of contaminant in one kilogram of soil.

“At the well head on top of the drilling rig, they measured 24 parts per million at 30 feet,” Sitton said. “When you got out to, say, 100 feet from the well—just based on a single measurement—you would have been down [to] below one part per million.”

Residents expressed they have experienced health effects such as nausea, vomiting and headaches.

TCEQ Toxicology Division Manager Sabine Lange said these effects may be due to the noxious smell itself rather than the chemical hydrogen sulfide specifically.

“For the most part, there weren’t any detections of hydrogen sulfide except in a couple of locations,” Lange said. “Those concentrations that were measured were all in the range of ‘you can definitely smell it,’ but we wouldn’t be expecting it to cause direct health effects or any lasting sort of health effects.”

“It’s not just sopping up oil,” he said. “They’ve got to go through tests. They’ve got to do what we call remediate—so they’ve got to remove all the oil and if there’s any dirt that’s soaked in oil, they have to dig that out too.”

IWR Operating reported it has completed remediation efforts Feb. 9, but not all testing is done, Sitton said. Oil may still be out there. The company has had no permit or regulatory violations and has applied for a second drilling permit, which has yet to be granted. There is still an open and active investigation being conducted by the TCEQ.

“If any other oil wells are drilled in this area, what will happen is—now that they know that this pocket of oil and gas is there—they will be having to use heavier drilling mud, they’ll have to use more sensitive pressure monitors, they’ll have different procedures on their blowout preventers,” Sitton said.

Residents living near the affected area spoke out, citing filed complaints regarding strong odors and health concerns going as far back as 2013 with no clear solution from state agencies. Several said they were in favor of stricter policies to regulate oil and gas production companies.

Miles said he plans to take legislative action to help prevent future incidents of this nature.

“Somebody’s got to have regulatory authority over what happens in our community,” he said.