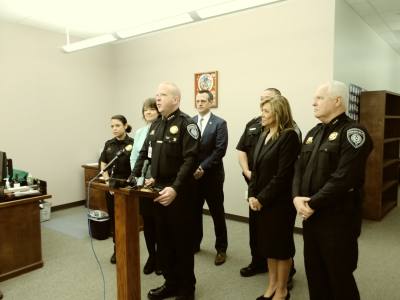 Wayne Thompson, Fort Bend County Constable for Precinct 3, addresses reporters at the Friday morning press conference. Texas Sen. Joan Huffman, R-Houston, second from right, also spoke at the conference and said she will be working with the legislature next year to support measures to end child sex trafficking in Texas.

The Fort Bend County Constable's Office for Precinct 3 is teaming up with a Katy-based nonprofit to loosen human trafficking's grip in the Greater Houston area.

“We teamed with Childproof America in order to combat this epidemic and to ensure the safety of our children and families in the future,” Thompson said.

Litvak said the typical victims of child sex trafficking are girls between the ages of 12 and 14, and that they can be recruited over a span of months or years. Often, the girl is recruited by someone she knows, such as classmates or peers in shared social groups, Litvak said.

“This is a crisis that is impacting our children in our schools, in our churches and in our neighborhoods,” she said.

Childproof America is hosting an educational referendum Feb. 20 at CrossPoint Community Church, 700 Westgreen Blvd., Katy, at 6:30 p.m. The event is free and Litvak said the training would be appropriate for "mature" 12-year-olds" and older. Registration is available online.

Anyone who suspects someone they know has been a victim of human trafficking should call the National Human Trafficking Hotline at 888-373-7888. Local help is also available through the Rescue Houston Hotline at 713-322-8000.
SHARE THIS STORY