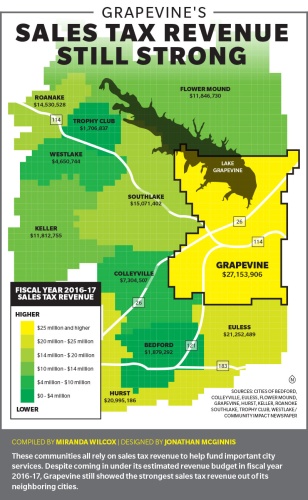 “Consumers have a lot more choices today, and that’s not only because of new retail centers in the surrounding areas, but it’s also because of greater online accessibility to goods and services,” Jordan said.

In spite of the dip in revenue, Jordan said he expects Grapevine to come back in sales tax revenue stronger than ever. He said Grapevine has launched several major projects that will bring in more people and more businesses as they become built.

“FY19 is going to be very exciting,” he said. “… Rising tides raise all ships­—that’s what we’re doing with our economic development.”

“Tourism is a major economic driver for the city of Grapevine and our local businesses, both large and small,” she said. “Convention and meeting attendees as well as leisure travelers shop in our stores, dine in our restaurants, experience our festivals and events, and stay in our hotels.”

Grapevine’s sales tax history shows that the city peaked in FY 2015-16, when it brought in nearly $28 million in revenue. As 2017-18 fiscal year projections show the city is expected to generate only $27.3 million—a decrease of more than $686,000 from its FY 2015-16 numbers—Jordan said he budgeted for this year conservatively.

“We saw declining revenues in sales tax, and sales tax being a volatile revenue source, we had to respond to that,” he said at an August City Council meeting. “One of the difficult things when we consider sales tax is there’s always a bottoming out and there’s always a topping off, so the question is, exactly where are we in that cycle?”

He said the city of Grapevine experiences four spikes in sales tax revenue each year: one at Christmas; one in March because of spring break activities and families on vacation; and the last two during September and October because families shop for their children as they go back to school.

“We have a very, very predictable sales tax trend,” Jordan said. “The predictability of this trend allows us to have a very accurate forecast as we move into the next fiscal year.”

The sales tax revenue of the city goes to several important city funds, he said, such as the Crime Control Prevention District, which uses a board of residents to oversee that a portion of the sales tax collected goes to efficient facilities, technology, equipment and special initiatives for the city’s police officers, and it also funds the city’s library and
street maintenance.

Jordan said that he and his staff correctly predicted Grapevine would see a revenue loss last fiscal year due to several factors. He said shoppers are typically more cautious of spending after an election year, in addition to the effects of online shopping.

Jessica Cruz, owner of Texas General Store in Grapevine, said she has also seen the internet directly affect her store. She said shoppers have come in the shop and have said they could probably find her same products online for cheaper.

She pointed out that once shipping costs are added the total cost of an item is usually more expensive than simply picking up the item in a local store. Cruz said shopping local helps keep the city functional.

“[Choosing to shop online] is impacting the people that live here,” she said. “... And maybe not for any cheaper.”

Aside from this decline, Jordan said FY 2016-17 laid the groundwork for investment and growth.

“Grapevine has really great days in front of it,” Jordan said. “This is the busiest I’ve ever been in 20 years of [working in city budgets].”

He said these projects could start generating revenue for the city of Grapevine as soon as 2019, when they are finished with construction and begin to open for business.

In addition, early 2018 reports from the State Comptroller’s Office also show Grapevine is up 17 percent in revenue compared with this time last year. Jordan said this adds to his confidence that sales tax will continue to remain a stable source of revenue.

With the groundwork for the city’s increased sales tax revenue laid, residents and business owners expect a surge of tourists to come to the city, which they said could develop even more sales tax revenue opportunities as more shoppers are introduced to Grapevine.

Cass Clements, director of operations at Grapevine Craft Brewery, said TEXRail could be a major contributor to Grapevine’s sales tax revenue as more people from around the Dallas-Fort Worth area will be able to ride the train to Grapevine.

She said Main Street’s TEXRail station is a project many local stores in that area are looking forward to.

“If someone comes in on the train from Dallas and they say, ‘Oh we went to Grapevine and we had a great time,’ they’re going to go tell their friends, too,” she said. “And even if they don’t stop then they can go, ‘We need to go see that town. It looks really cool, and we can get there on
the train.’”

Jordan said the economy in Grapevine is strong, and that both the shops on Main Street and the Grapevine Mills mall continue to be solid economic drivers for the city.

“I think that [FY] 2018 is going to be a better year than [FY] 2017,” he said. “That’s one of those things we will continue to monitor and as we go through the fiscal year. All of those data points will help us forecast into FY19.”