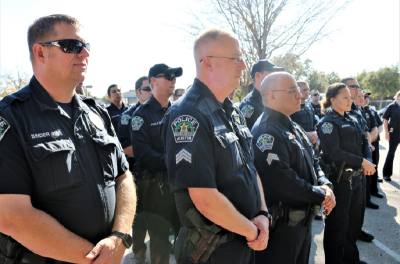 The Austin Police Department is currently operating without a contract.

On Dec. 13, Austin City Council rejected a proposed five-year contract with the Austin Police Department, citing concerns about affordability and accountability. The contract would have cost the city an additional $80 million over five years to provide a 9.5 percent raise to officers, who are already the highest-paid in the state. Scores of Austin residents provided public testimony in opposition to the contract, which they said lacked adequate civilian oversight. In a report from the police reform organization Campaign Zero, the city of Austin had the highest rate of police killings in Texas for 2015, according to data from the U.S. Census Bureau, the FBI Uniform Crime Report and MappingPoliceViolence.org.

When the contract expired Dec. 29, APD reverted to the state’s civil service law. Until a new contract is ratified, certain stipends, including for mental health training, and hiring procedures meant to increase diversity will be eliminated. On Jan. 2 Mayor Steve Adler and Mayor Pro Tem Kathie Tovo released a statement urging the city to approve an interim contract with the police union. The union has not responded.

Council will consider a new contract by March 22. It may address provisions for more officers, which is of particular concern to residents in recently annexed Northwest Austin neighborhoods, many of whom feel underserved by a stretched-thin force, according to District 6 Council Member Jimmy Flannigan. It will also allow for input from Spencer Cronk, the newly appointed city manager.

Editor's note: This post was updated to clarify the wording of Austin's rate of police killings and to cite data used in the Campaign Zero report.
SHARE THIS STORY