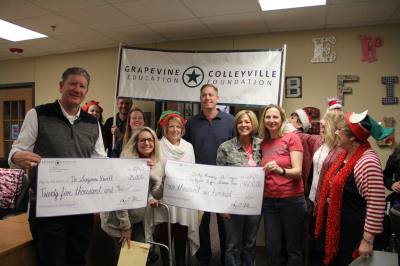 After serving more than 13 years as CEO for the Grapevine-Colleyville Education Foundation, Janice Kane has retired.

“I am retiring to enjoy my family and do more with my family,” Kane said. “My husband has retired a couple of times—maybe [he] will take the final jump to retirement after I do.”

On Jan. 18 the Education Foundation held a retirement party for Kane to honor her years of service to the foundation and the community.

“I don’t even know the right words to describe my gratification and sense of achievement,” Kane said. “… Our Education Foundation has grown and accomplished so much that benefited all of our GCISD students and teachers over its first two decades. It has a strong foundation and framework in place and is ready for some others to take the lead and take it to another level.”

Since the Education Foundation’s inception in 1998, Kane has been a familiar face of involvement. She first served as a founding director on the foundation and a liaison to the district’s board of trustees, as she already had a seat on the board. She retired from the board of trustees in 2001, and she and her husband left for Philadelphia in 2003. After a short stint there, Kane and her husband returned to Grapevine in 2004, and she was immediately asked to serve as CEO of the Education Foundation.

She said her favorite time of year serving as CEO is when the Education Foundation travels throughout the school district to visit campuses and surprise teachers with grants they will use to benefit their students.

“The smiles and tears of happiness can never be forgotten,” Kane said.

Kane isn’t going far after her retirement. She said she wants to spend more time with her grandchildren and volunteering at Grapevine Middle School, where two of her grandchildren attend. She will also serve as president of the Grapevine Rotary Club starting in July and will continue her service on the Baylor Scott & White board.

As far as the Education Foundation, Kane said it will undergo some restructuring and add two new staff members who will be tasked with fundraising, community relations and administrative and operational activities.

“The torch is also being passed to a great group of dedicated individuals who have served in the past, serve now and will serve in the future as directors for the Education Foundation,” Kane said. “It is truly their role to ensure that the Foundation's torch continues to burn for many years to come for the benefit of all the students, past, present and future, in GCISD.”
SHARE THIS STORY