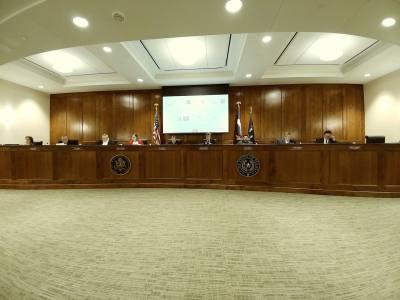 The Katy City Council met Monday, Jan. 22 for their regular meeting at City Hall. Repairs to the building necessitated by flooding last fall are almost complete.

Other topics discussed during the meeting included:

The current contract dates back to 2015 and does not allow for the pick up of bagged trash nor bins that are not provided by Republic. But the city's ordinance had allowed trash to be put out in cardboard boxes, loose trash bags or store-bought trash bins.

David Aguilar, a municipal services manager with Republic, said that the company had been picking up these items anyway in order to provide customer service. But internal audits showed Republic was losing money on the Katy trash services contract, he said.

Council members heard comments from residents, Aguilar and City Attorney Art Pertile before the vote. A provision in the originally proposed ordinance that called for a fine of up to $2,000 for noncompliance with the ordinance and contract was struck down by councilman J. Gary Jones of Ward A.

The move was done to allow city officials and Republic to develop ways to address resident concerns, which dealt mostly with yard waste such as leaves and tree trimmings.

Brawner and Boothe said that one of the reasons that the mandate is in place is to prevent subsidence, or the sinking of land due to groundwater being removed from the earth.

Council authorized $495,000 to extend a 27-inch sewer main for the Falls at Green Meadows and Cane Island neighborhoods. City engineer David Leyendecker said this is the sewer system's penultimate extension according to the city’s strategic plan.

The last step is connecting to new sewer lines near Morton Road for roughly $500,000.

"It’s the major sewer line that’s going to serve the western part and the northern part of the city,” Leyendecker said. “We’ve been building it one step at a time. This is about our fifth bite out of it.”

Harvest Plaza in downtown Katy hosts the farmers market and crafts showcase every third Saturday of the month.

5. City surplus vehicles to be auctioned

A 2016 Ford Explorer used by the city Parks and Recreation Department and a dump truck used by the Public Works Department will be auctioned. Both vehicles were flooded in August and September but Katy Finance Director Becky Wilkins said the dump truck was off of the city’s insurance list due to its age, .

A new dump truck will be purchased.
SHARE THIS STORY