Leander ISD athletic stadiums may get LED scoreboards, if approved by district board 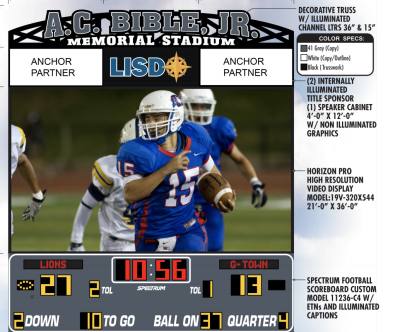 Three Leander ISD athletic stadiums may get LED scoreboards, depending on whether the district’s board of trustees chooses to pursue the program.

The board heard a presentation about the displays at its meeting Jan. 4.

“One of the coolest things if the board was to allow us to move forward with the scoreboard is the opportunity to incorporate students," LISD spokesperson Corey Ryan said.

Students could have the opportunity to be part of a broadcast team to run the LED scoreboards and develop skills in the video production, depending on how the district decides to staff the programs, according to the presentation and Ryan.

The presentation stated that over 550 high schools across the country use video boards, including nearby schools in Round Rock ISD and Lake Travis ISD. The LED scoreboard displays would provide revenue by selling advertising space on the boards, according to the presentation.

The board discussed implementing the outdoor LED scoreboard displays in three phases or all at once, and how each would affect advertising sales. The presentation illustrated the option of the scoreboards rolling out in three phases.

"I'm wondering if it's easier to sell all [the advertising] at once," Superintendent Dan Troxell said.

"I do think saying seven to eight years is realistic [for a payoff period]," Troxell said. "I'm hoping we'd get the payoff period even less than that."

Troxell said that LISD staff will bring more information on the displays to the board of trustees for consideration at a future meeting.

At the same Jan. 4 meeting, the board of trustees also voted to raise the salary of district bus drivers and considered a budget amendment to allow new instrument purchases.
SHARE THIS STORY