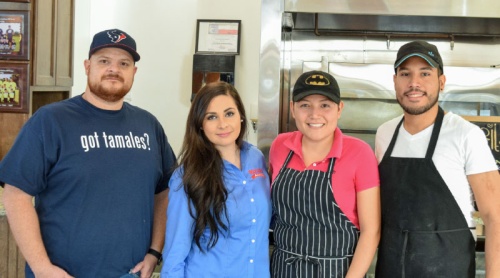 Siblings Martha (second from left) and Ruben Perez (far left) and their family have run Marthau2019s Mexican Grill since 2016. Martha Perez follows in her parents’ footsteps as she runs the family’s restaurant at 2611 FM 1463, Ste. 400, Katy, near the Firethorne subdivision. Four of Martha’s Mexican Grill’s 11 employees are family members, and the recipes used in the restaurant came with Perez’s parents when they arrived in the U.S. from Mexico.

“My parents, when they were in Mexico, had their own little restaurant,” Martha said. “We moved here, and my mom would always cater and sell food and tamales from home.”

Her parents had a restaurant in Mexico City, but her father immigrated to the U.S. in 1985 when the business fell on hard times. Five years later, he brought his family, and eventually, they all became American citizens, Martha said.

Martha said all of the food is 100 percent authentic Mexican cuisine. Staffers make all dishes from scratch, which is why more time-consuming dishes, such as barbacoa, menudo and pozole, are only served on the weekends.

“We don’t freeze anything. We don’t have it on a steamer,” Martha said. “I think that’s why we’ve been successful as well.”

The eatery’s most guarded recipe is that of her mother’s tamales. Only family members know it, and Perez’s mother makes them from scratch.

Tamales are sold individually, by the plate with rice and beans, by the half-dozen or by the dozen. Martha and her younger brother Ruben work in the Katy restaurant while her father and older brother Javier work at the Cypress restaurant and her mother shifts between the two locations.

Martha is hopeful the business will continue to grow. The family would like to move Martha’s Tortillas into a larger space and create a third location in the next five years and eventually pass the business on to the next generation, she said.

Martha and Ruben said running Martha’s Mexican Grill is hard work, but rewarding. Regular customers come in each week for tamales or queso, which Martha said has earned the praise-filled nickname “liquid gold.”

For her, interacting with patrons is the best part of running the restaurant.

“I’m very quiet, but I like relating to the customers,” she said. “I like checking to make sure that everything’s done correctly.”

¿Qué es un tamal?
Tamales have a long history, including their recorded observations by Spanish conquistadors upon their arrival in Mexico. A tamale is a small, steamed mixture of fillings and maize,

The maize is usually made from finely ground, dried corn treated with unslaked lime and with the consistency of a thick paste. The maize and filling are spread onto a corn husk, which is folded closed and then steamed until its contents are cooked through.

Fillings may include meats, cheeses, chilies, herbs, fish or vegetables;  some tamales have no filling at all.

Regional tamale variations on the Gulf Coast of Mexico and on the Yucatan Peninsula may use banana leaves instead of corn husks.