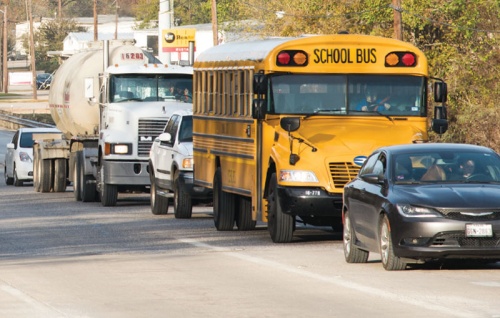 The Texas Department of Transportation will expand FM 2054 in Conroe in a project that will start in 2018.

The Texas Department of Transportation is undertaking several initiatives on three major corridors­—FM 2854, FM 1097 and Hwy. 105—to improve east-to-west mobility in the Lake Conroe Area.

A project to reconstruct and widen FM 2854 in 2018 is expected to alleviate traffic congestion along the corridor and provide relief to an increasing number of commuters who travel across the Lake Conroe area regularly.

TxDOT is also expanding FM 1097, and recently completed a study evaluating traffic on Hwy. 105 to find ways to improve congestion.

“The east-west corridors are very important in Montgomery County,” said Adam Galland, TxDOT area engineer for Montgomery County. “We don’t have major interstates going east-to-west in the county, so these state roads carry a lot of the traffic. Safety is our top goal.”

“Right now, that road is used as a cut-through; a lot of people don’t want to take Hwy. 105 because of all the traffic signals so they use FM 2854 instead to get to I-45,” Woolley said. “There is a lot of traffic but not a lot of development.”

To address that congestion, TxDOT will widen FM 2854 between I-45 and Loop 336 from two to four lanes. The $20.2 million project is expected to start as early as summer 2018. Officials said the cost of the project is largely due to a complete reconstruction of the road and a bridge over a drainage ditch near I-45.

The agency is also planning to repair the thoroughfare from just west of Loop 336 to Hwy. 105. The $9.3 million project will repair the surface of the roadway, and crews are expected to break ground in late 2020 or early 2021. The project could add a few left-turn lanes at certain intersections throughout the roadway, officials said.

“We always look at the conditions of our pavement—the life of it, any cracks and how long the pavement will hold up before it starts getting potholes,” Galland said. “That is why we are planning to resurface that road. Our ultimate goal is to expand that segment in the future as well.”

Although TxDOT is managing construction of the project, the city of Conroe is investing $942,000 to relocate water and sewer lines to accommodate the expansion. Montgomery County Precinct 1 also contributed about $500,000 to the construction project.

TxDOT is also working with Montgomery County Precinct 1 to expand FM 1097 from two to four lanes, as well as adding a continuous left-turn lane, between I-45 and Lake Conroe. Traffic on the roadway is expected to increase from about 24,800 cars in 2021 to 35,400 in 2041, according to TxDOT.

The project will be completed in three phases over. In all, construction of the three phases will cost $41.7 million.

Crews will expand the roadway between I-45 and Anderson Road starting late 2018, and officials expect the project to take two years to complete.

Precinct 1 Commissioner Mike Meador said officials are purchasing the right of way for the $15.24 million segment.

“Sometimes between planning, environmental assessments and right of way [acquisition], that can take a lot of years,” Galland said. “It is a lot of work to get everything ready. If you wait until you have traffic there and then you start, it could be another five or 10 years before you get that road built out.”

Galland said partnerships with local stakeholders also help move projects forward. Meador, whose precinct is contributing about $8 million to the first FM 1097 project from Montgomery County’s 2015 road bond referendum funds, said the project has been in the works since 2005. The county funding was approved during the Nov. 28 Commissioners Court meeting.

Meador said one of the pressing factors for the project is increasing land costs that stem from the incoming The Woodlands Hills community, which will add about 4,500 homes to the region upon buildout.

“When The Woodlands Development Company paid what they did out here, the price of all that land went crazy, Meador said. “I wish we could have done [the FM 1097 expansion] earlier, but we didn’t. Had we bought the property 3-4 years ago we could have saved $1 million or $2 million.”

TxDOT also completed a study on Hwy. 105 in the summer to assess changes that can be made to improve traffic flow. The study does not evaluate the need for additional lanes but considers traffic signal timing, the need for new signals or signs at intersections, changes to the corridor’s left-turn median and driveway improvements at local businesses, to name a few.

The study was completed in the summer, but the agency does not have plans to undertake any projects identified in the study until funding is acquired, Galland said. There is no timeline for funding of any projects that stem from the Hwy. 105 study.

“There is no funding for the projects,” Galland said. “It was a planning study to improve safety in the corridor. We are still evaluating the study, and we plan to reach out to the community and get more input on our plan for that corridor in the future.”

Brian Bondy, Conroe/Lake Conroe Chamber of Commerce president, said while Hwy. 105 is one of the region’s most trafficked corridors, it also represents one of the most important economic drivers given the number of businesses located alongside the roadway. He said improving mobility along the corridor could be a boon for local businesses.

“Mobility can create a trickle-down effect of issues, all of which are important for doing business in a community,” Bondy said. “The ability for a company to get their goods and services delivered efficiently and getting their employees from their home to their place of work is very important.”