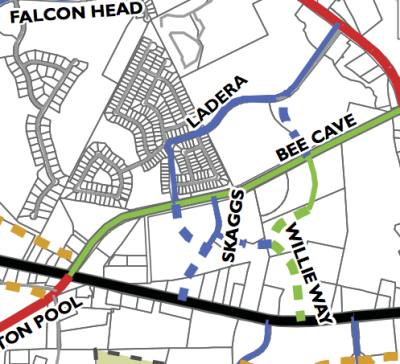 Bee Cave Council voted down a proposal from Mayor Caroline Murphy on Dec. 12 to hire an outside engineering firm to study options for a roadway through city-owned land fronting Bee Cave Parkway near the Ladera subdivision. The proposed study would have evaluated a connection south to Hwy. 71 W.

“I don’t see the need for it,” Mayor Pro Tem Bill Goodwin said. “What this is going to look like is that we’re providing access to [developer Chris] Milam’s property [The Backyard development].

It’s the first thing we were accused of when we bought the Skaggs tract. I have not seen a traffic impact analysis that has identified [Bee Cave Parkway as being a problem for residents]. I haven’t heard a word except for some residents of Ladera complaining, but only in the context of The Backyard development.”

Milam’s stated inability to acquire a road easement from a neighboring property owner for a second access point has been at the root of council’s hesitation to approve the proposal. After initially approving the plan in 2016 based on Milam securing access to Hwy. 71, city leaders in November, voted down an amended plan for The Backyard which included a smaller-sized concert venue to help alleviate the access and traffic concerns.

Murphy said Dec. 12 that the city’s property does not connect to the Backyard property. She said her reasoning for the road study related to easing traffic concerns from nearby residents.

“I put the [Skaggs property] item on the agenda because residents [of Ladera] are starting to have difficulty pulling out onto Bee Cave Parkway,” Murphy said. “I wanted to talk about signalizing that intersection [at Tordera Dr.] sooner rather than later. In the next two years, there’s going to be more traffic on Bee Cave Parkway as we’ve always anticipated.”

The mayor also said a road through the city land would help what she called the “failing” intersection farther west where Bee Cave Parkway meets Hwy. 71 at Hamilton Pool Road.

The city’s 2016 comprehensive plan includes a proposed cut-through road on the 22-acre Skaggs parcel that the city also purchased that same year and listed the road as “subject to further study.”

There have been recent informal talks for the land’s best use including developing parkland, a library or a future municipal services building. However, there are currently no public plans for the land, which sits adjacent to the newly-opened Hill County Indoor Sports & Fitness complex.

Of the proposed Skaggs property road, Council Member Monty Parker, who lives in Ladera, said the road study was premature.

“I don’t want to be accused of purchasing the Skaggs property for anything other than it was a darn good investment for the city,” Parker said.

Council Member Marie Lowman said the optics look bad if council members were to issue a request for a cost estimate on the road.

“If we don’t know what’s going there, I don’t want to spend [the city’s] money on figuring out where the road is,” Lowman said Dec. 12, adding that she didn’t think there was any urgency on the matter.
SHARE THIS STORY