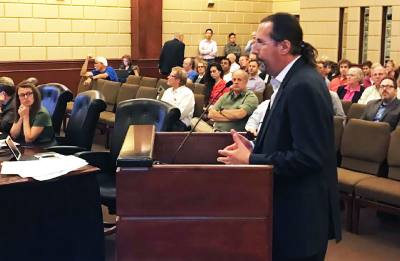 The Backyard developer Chris Milam addressed the City Council at its Nov. 28 meeting. A number of Bee Cave residents expressed opinions at the podium.

A project that long promised to resurrect a music venue that one Bee Cave council member said used to make the city special remains up in the air after the City Council failed to pass a special vote Nov. 28 to amend the development plan for The Backyard.

“We’ve got an opportunity to bring it back,” said Council Member Marie Lowman just before the failed vote. “A music venue as the heart of our city doesn’t have to be a bad thing.”

Developer Chris Milam led the latest defense of the project, saying it would generate up to $5 million in annual sales tax production for the city and up to $10 million for Lake Travis ISD.

Milam’s proposal included traffic management strategies and a last-minute offer to pay to install gate entrances to the nearby Ladera community to eliminate cut-through traffic headed to and from the proposed 36-acre venue on Bee Cave Parkway, adjacent to the city’s Central Park.

Bee Cave area homeowners told City Council members at the Nov. 28 meeting they opposed the development of The Backyard due to a range of concerns, including:

Bee Cave’s Planning and Zoning Commission voted Nov. 7 in favor of the modified development agreement.
City staff recommended the latest amendment, citing its own traffic control studies conducted in September 2016 that showed few projected delays on concert evenings thanks to proposed longer turn lanes as well as a long drive inside the venue that would stack traffic for up to two-thirds of a mile on the way to two planned parking garages on the site.

In July, the council, in a tie vote, shot down the development plan over the Hwy. 71 access issue.
SHARE THIS STORY