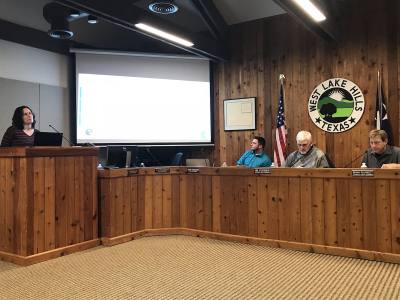 West Lake Hills City Council reviewed a street pavement study Nov. 8 as part of a presentation from engineering firm K. Friese & Associates, which presented a list of the city’s 10 top priority roads as well as cost estimates for proposed improvements.

“We wanted to do an evaluation of the old streets in the city to develop recommended solutions as well as priorities for repairs,” K. Friese & Associates project manager Vicki Ortega said at the meeting.

As part of the evaluation, K. Friese & Associates staff drove each section of road in the city twice—once to feel the overall smoothness of the road and a second time to look for stresses like cracking and other surface defects, Ortega said.

Roads were then rated and prioritized, allowing the Westlake-based engineering firm to develop a list of potential projects and cost estimates, she said. Roads that are already being addressed in future projects were not included in the list.

According to the study, Redbud Trail from Bee Caves Road to Westlake Drive was listed as the city’s top priority. It also called for the most expensive renovations, with planning and repairs estimated to cost $1,330,740.

Ortega said that the pavement study is one step in developing a comprehensive list of recommended street and drainage capital improvement projects for the city. The drainage aspect of the plan was completed and presented to City Council on April 26. The comprehensive list would be a five-year look at projects that could work in tandem with each other.
SHARE THIS STORY