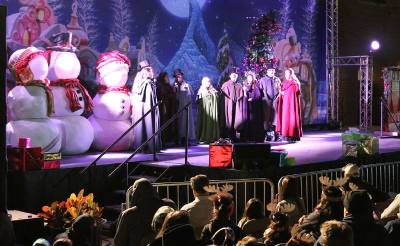 In 2009 the Texas Senate designated Grapevine as the “Christmas Capital of Texas.” The community expends time and effort to earn the title; however, it also receives an economic return on its investment.

“Grapevine has a long history of exciting Christmas events,” Leigh Lyons, Grapevine Convention and Visitors Bureau communications director said. “…[Grapevine] is just what you think of when you think of the traditional family happy Christmas.”

In addition to the increase in sales tax revenue, the season brings to Grapevine visitors  who come to enjoy holiday activities and contribute to making Grapevine the “Christmas Capital of Texas.”

From January to November 2016, Grapevine received an average of $3.39 million in sales tax revenue per month, reports from the state comptroller’s office show. In December, however, that number jumped to $4.63 million, a difference of $1.24 million.

Lyons said this is partly because during the Christmas season, more people stay the night in Grapevine.

“In November and December the city of Grapevine gets a Christmas gift, because what happens is, particularly from the overnight visitor, that amount [that visitors spend] goes up because they’re going to bring their families,” she said. “So they’re bringing everyone here just to celebrate and buy tickets to Ice and buy tickets to the North Pole Express and all our other activities.”

Grapevine Chamber of Commerce CEO RaDonna Hessell said before the 2009 designation, Grapevine had already established a Christmas reputation for itself among local businesses, who in turn partnered with the Convention and Visitors Bureau.

Lyons said more than 200 people sign up to volunteer at the North Pole Express alone during the holiday season. Hessell added that more than  500 volunteers sign up for Grapevine’s Christmas parade.

Lyons said many of the volunteers are affiliated with a multitude of organizations, including the Chamber of Commerce, the Historic Downtown Grapevine Association, Grapevine-Colleyville ISD, and any local organization that uses volunteers.

Grapevine builds on its “Christmas Capital” designation with an estimated 1,400 events in 40 days. Lyons said this is calculated by how many Christmas events are held in Grapevine that are either a one-time production or have specific restart times each year.

Lyons said the amount of time and energy Grapevine puts into the Christmas season is worth it.

“In order to become the ‘Christmas Capital of Texas,’ Grapevine relied on our elected leadership, various city departments, and volunteers to create and promote Grapevine’s Christmas activities,” Lyons said. “As new events and favorites returned each year, Grapevine’s business community and stakeholders began to embrace the branding and that’s when the Christmas Capital of Texas really began to grow into what it is today.”
SHARE THIS STORY

“We want to erase that stigma of what they can and what they can't do, based on their own abilities—not what someone else may be saying or doing," said Mark Latham, director of Grapevine-based nonprofit Latitudes.

Truck-mounted fogging for mosquitoes near 240 McDonwell School Road in Colleyville will take place Sept. 21 due to a positive West Nile virus sample.