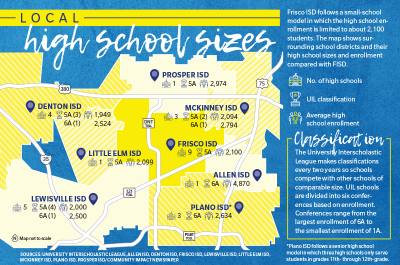 Residents have spoken: the community wants to keep the small-school model Frisco ISD employs for its high schools.

Earlier this school year, FISD established a long-range planning committee made up of community members to serve in an advisory capacity to the board of trustees and administration. Through conversations with the committee about changing or moving away from the small-school model for high schools as well as a community survey sent out to FISD parents and community, the district received overwhelming feedback in favor of the small-school model.

“We hadn’t engaged the community formally since the early to mid-’90s, and at the time the community was a rural farming community for the most part,” Deputy Superintendent of Business Services Todd Fouche said. “The growth hadn’t happened yet, and some citizens had determined that the schools should be capped at a certain size. And we’ve kept the model ever since.”

However, Fouche said it was recently brought to the district’s attention that the community that decided it wanted the small-school model 25 years ago is not the same community of today.

The purpose of the committee and the survey was for FISD to engage the community about the future of the small-school model, Fouche said.

Financial implications
The small-school model is FISD’s mission to keep its high schools within the University Interscholastic League’s 5A designation, meaning that the average enrollment for an FISD high school is limited to about 2,100 students.

The UIL adjusts alignments every two years so that schools compete with other schools of comparable size. UIL conferences range from the largest enrollment of 6A to the smallest enrollment of 1A.

Fouche said the reason for the small-school model is to facilitate more student engagement and involvement.

“Our high schools are still big, but compared to other districts our size with 50,000-plus students, instead of letting our high schools reach 3,500-4,000 students, we try to limit them to 2,100,” Fouche said. “That way we can get all of our graduating classes to 550 students or less.”

In order to continue with the small-school model, the cost would be more expensive than building 6A schools but only by 3-5 percent, Fouche said.

Under the district’s current bond program, FISD has plans for an 11th high school that could open in either fall 2021 or 2022. Fouche said in the next 10 years, however, there could be a need for a 12th high school, which FISD would need to pass an additional bond program to fund.

He said a bond program is pretty much the only option the district has to fund the construction of more schools.

“We’re still growing by 2,500 students every year. What we’re trying to do right now is utilize all the capacity of our existing buildings, but that will only go so far,” Fouche said. “Building buildings is still going to be part of our future.”

When it comes to planning facilities for a school district, the decision falls to the local taxpayer, said Guy Sconzo, executive director of the Fast Growth Coalition, an advocacy group  in Texas that works to find legislative solutions to help fast-growth districts.

“The state does have a program to fund facilities that assists districts in paying off debt for new facilities, but we’ve gone from a high in 2001-02 of state support being 45 percent to this past year state support being 7 percent,” Sconzo said. “What that means is that 93 percent of the burden for paying for new facilities that are essential falls to the local taxpayer. So it makes it more important that questions of whether schools should be large or small should be left to the local communities.”

Discussions and survey
FISD board of trustees President John Classe said after the tax ratification election failed in August 2016—in which the district asked voters to raise the tax rate by 13 cents—the board decided it wanted to do a pulse check with the community in order to determine if the district should continue with the small-school model, even though it might have slightly higher costs.

“For us to have ignored that election and just continue doing what we were doing as if it never happened, I think would have been [irresponsible],” he said. “That was the idea with forming the committee—so people could take a deeper dive to look at the costs associated with [the small-school model] and whether the community would support continuing that or want to make a change.”

The long-range committee is made up of 50 community members, who have held three meetings. In these meetings, the committee was presented with four different potential high school build-out options based on 10-year projections.

According to some committee members, most of the committee expressed continued support with the small-school model, but some were also interested in the senior high school conversion because it still would have had an average enrollment of 2,100 students per school.

Fouche said it is feasible for FISD to continue with the current model even though it can be difficult at times—especially when it comes to rezoning.

“In theory if we had one giant high school, it would never get rezoned because everyone would know that’s the high school everyone went to,” he said. “I know there is some fatigue with rezoning on the staff and parents, but what we wanted to know [is] if that’s what [the community] wants before we start making decisions, and we’re willing to make it feasible if other people agree with that.”

Efforts made by the committee will be presented at the Dec. 11 school board meeting.

FISD sent out a survey to FISD parents and the community asking about the small-school model and whether it needed to change. More than 4,100 people participated in the survey.

Classe said in the past two years the district has found more frequent ways and opportunities for the community to provide input, including committees of community members to look at budgeting and operations of the district.

“We’re just looking for more ways than we traditionally have to get community members involved to kind of take a look under the hood to know the how, why and what of how the district is run,” Classe said.
SHARE THIS STORY

Candy-lovers can head to Stonebriar Centre soon for chocolate, taffy, gummies and more.

A total of 322 units comprise the five-story luxury apartment community.

Fire & Ice served a variety of cocktails and food such as burgers, pizza and kabobs.

The Hawaiian-inspired beverage cafe will serve dozens of flavor and boba combinations.

The proposed site plan from Corgan architects is similar to Lawler Middle School.