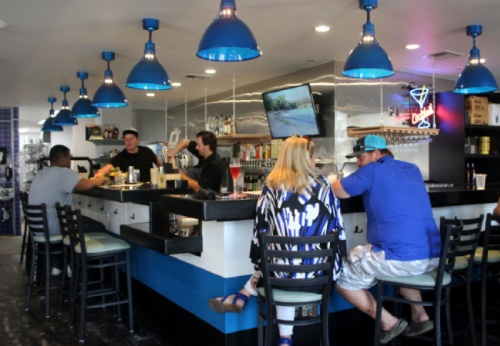 Parrott said the restaurant has a strong late-night crowd.

Since July when he opened The Back Porch, owner Dan Parrott said he is still waiting to see consistent crowds.

“Dinner is strong, but lunch is spotty,” he said. “We’re trying to attract new customers and get our name out.”

To help with that, he launched a new brunch menu on Sundays that did so well the restaurant now offers it on Saturdays, too. One of the highlights of that menu is the creme brulee French toast and Parrott’s favorite, the Eggs in Purgatory with ciabatta toast, red sauce and prosciutto.

One of the most significant changes to the menu was the addition of beer-battered fish and chips that is featured on the menu at Old School Bar and Grill in downtown Austin that Parrott owns with his son, Danny.

“If I tried to remove it from the menu, I wouldn’t be able to get in the door because of the protests,” Parrott said. “Within three days of putting it on the menu it is the No. 1-selling item.”

Late-night service has also been popular with diners who like the fact that the kitchen is open until midnight.

“It turns out a lot of people want a nice clean bar to go to at 10 p.m. and not have to go downtown or to The Domain,” Parrott said.