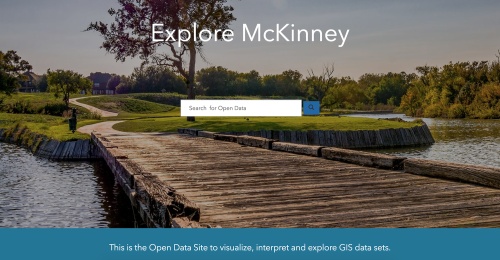 The city of McKinney launched an interactive data portal for businesses and residents Nov. 14.

The city of McKinney launched an interactive data portal Nov. 14 for residents and businesses to find information about the community ranging from a retail development map to garbage collection zones.

The interactive site, called Explore McKinney, uses geographic information system maps and data, according to a news release from the city.

"The city has access to extensive data and the challenge has always been how to best share this data with the citizens and our development partners," Michael Quint, executive director of development services, said in the release. "If we cannot share the data and information in a user-friendly way, then it loses its impact, but Explore McKinney solves that problem."

Two interactive maps can also be found on the website.

The retail development map showcases "noteworthy restaurants, entertainment venues, shopping centers and stores coming soon to McKinney," according to the release. These businesses have either signed an agreement with the city or have submitted building permits for their respective projects.

The second map will allow users to view update improvements to streets, drainage, public safety, grant projects and facilities that are part of the city's five-year capital improvement program.
SHARE THIS STORY