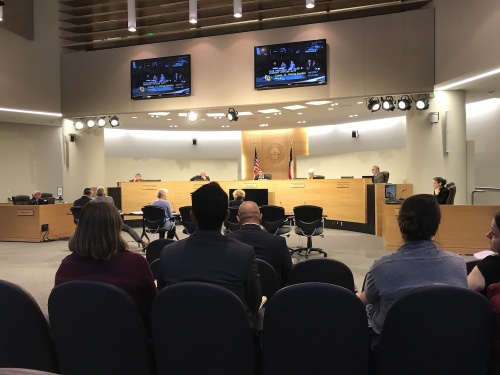 Commissioners appointed two members to the Central Texas Regional Mobility Authority board of directors at a meeting Jan. 30.

Voters approved two low-water crossing projects in the 2011 bond program—Bee Creek Road and Old San Antonio Road. During the design process, public meetings were held and the Bee Creek project received considerable opposition to the alternative presented. Due to a number of site limitations and a lack of consensus among the residents in the area, the Old Bee Creek project was terminated and money was allocated for the Old San Antonio Bridge.

The design for the Old San Antonio Bridge, which will widen the roadway from one lane to two lanes and elevate the road above the 100-year floodplain, was completed but additional funding is needed to cover the updated estimated construction costs.

“The reason this [money] was available was because the 2011 bond project had identified the [Bee Creek Road] low-water crossing as a spot that needs a bridge,” Commissioner Gerald Daugherty said. “I, for one, have always been one to go out and ask the public and the people that are really the most affected and it was pretty obvious that people in the area thought [Bee Creek Road] was not a very important deal to [them] because they had a couple of other ways to get out of the area.”