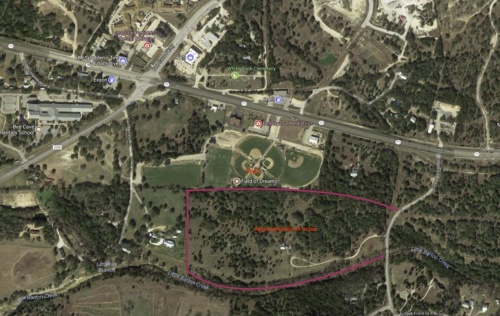 Image showing about 44 acres of land the City of Bee Cave will purchase from William Lamar. There is no current planned use for the tracts.

The city of Bee Cave has begun the process of purchasing about 44 acres of undeveloped land on Great Divide Drive south of the Field of Dreams sports complex, city staff confirmed to the Community Impact Newspaper.

Council approved the deal during its Sept. 26 meeting and Council Member Monty Parker posted about the deal afterward on his Facebook page.

“This represents a terrific opportunity for our City to preserve open space, counter future dense development, and create options for our connectivity plan along Little Barton Creek,” he stated

However, the city has no current plan for this property, which takes in a section of Little Barton Creek, other than to preserve the land as open space, Parker said.

Property records show the land, which is made up of two parcels, is currently owned by Lamar Williams. Together, both are appraised at about $790,000, according to the Travis County Appraisal District website. But council will consider a final purchase price and other details at a future meeting, City Manager Travis Askey said in an email.