The Gatehouse breaks ground on its Early Learning Childcare Academy 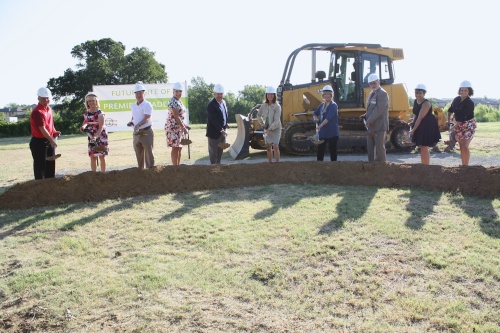 The Gatehouse broke ground on its Early Learning Childcare Academy on July 14.

The Early Learning Childcare Academy will open on The Gatehouse's campus in 2018.[/caption]

It has been two years since The Gatehouse in Grapevine opened its doors to women and their children who were leaving a crisis and in need of a safe place to stay. However, the campus is still evolving and expanding to include new services for its families.

The 15,000-square-foot academy will be operated by Premier Academy. The $4.5 million building will include eight classrooms, a 4,550-square-foot gym, two playgrounds and a kitchen. When it opens in fall 2018 it will serve approximately 150 Gatehouse children at discounted rates and 150 area children at fair-market rates.

The Gatehouse, located on 61 acres in Grapevine, is a privately funded supportive living community that features 96 apartments for women and their children. As part of the individually tailored Independent Life Program, women and their children can stay at The Gatehouse for up to 2 1/2 years and receive services such as food, clothes, cars, auto maintenance, medical treatment, dental treatment, legal aid, financial literacy training, career development guidance, child care, professional counseling, and higher education as part of building new lives and ending cycles of abuse and poverty.