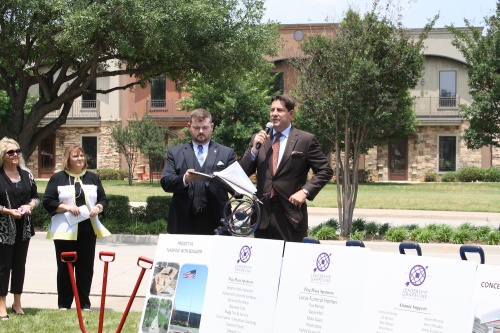 Ground was broken on Memorial Flag Plaza on May 18.[/caption]

On Thursday, city dignitaries and community leaders broke ground on Memorial Flag Plaza, which will serve as a symbol for the 25th anniversary of Leadership Grapevine and the leaders who have graduated from the program.

The flag plaza will be built in a highly visible location on the Grapevine Chamber of Commerce grounds, which is located at 200 Vine St., Grapevine. The 25th class of Leadership Grapevine graduated May 18.[/caption]

Leadership Grapevine is a program the city of Grapevine and the Grapevine Chamber of Commerce puts on that offers an educational experience designed to develop an awareness of the city, its relationship with the DFW Metroplex and to provide personal leadership training. The 25th Leadership Grapevine class graduated shortly before the groundbreaking.