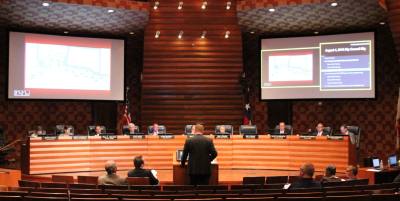 Keating, who is a former council member, is expected to assume the Place 1 seat in April. The seat—which is an unexpired term that is up for election next year—is being vacated by Council Member Bob Allen as he runs for Frisco mayor.

The FISD board of trustees will hold a special board meeting Monday to discuss the next steps in the superintendent search. During Monday's meeting, the board will hear presentations from several search consulting firms.

Superintendent Jeremy Lyon announced his retirement March 17. Lyon will leave FISD at the end of this school year.

The meeting begins at 8 a.m. at the FISD Administration Building, 5515 Ohio Drive.

The commission will vote on a preliminary plat for more than 130 single-family homes on 40 acres at the northeast corner of Rockhill Parkway and FM 423, just south of US 380. The meeting will be held at 6:30 p.m. Tuesday at Frisco City Hall, 6101 Frisco Square Blvd.

The board will vote on ratifying a contract to purchase 32 acres of land in Allen to build future facilities. The land is near the intersection of SH 121 and Alma Road, and the purchase price is $10.65 million. The meeting begins at 5:30 p.m. at the Collin Higher Education Center, 3452 Spur 399, McKinney.
SHARE THIS STORY