These 6 priorities establish the foundation of Austin's new strategic plan 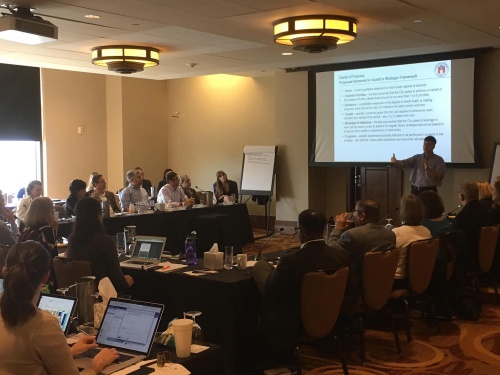 Council members and the city's executive staff gathered at the AT&T Conference Center to begin shaping the city's strategic plan for the next couple years.

With a new year and a new council on the dais, the city’s elected officials and executive staff spent their annual retreat drafting the foundation of a strategic plan.

Mayor Steve Adler said adopting a strategic plan is new territory for the Austin government, and this would be the first one drafted in memory. With the help of consultants from the firm Accenture, the council and staff defined the city’s priorities with the idea being that every action taken by government officials would work toward achieving these priorities.

“When we sit down at the budget process, we should be asking ourselves with respect to everything we do, ‘How does this relate to our strategic goals?’” Adler said. “It will make it easier, it will make it better, more directed and more responsive to the challenges the community has asked us as a council to deal with.”

The City Council and staff will use six priority outcomes on which to base their upcoming decisions:

As Austin grows, the city wants the ability to provide economic opportunities and resources that enable Austinites to sustain their lives and communities. The city will look at areas such as employment, poverty, cost of living, housing, homelessness and economic mobility as indicators of this priority’s success.

The City Council defines its goal of mobility as the ability of the city to get Austinites “where and when they want to go, safely and cost-efficiently.” Residents made a statement in 2016 when they passed the $720 million mobility bond in November, and work will begin later this year. Addressing the city’s mobility beyond the bond will be something frequently analyzed as the city grows. The city will look closely at areas such as road congestion, commute time, frequency of accidents, injuries and fatalities of motorists and pedestrians as well as roadway conditions and how people feel about their ability to get around the city.

In the vision of Austin’s future success stands the safety of its residents, employees and visitors. To measure the safety felt inside homes, at work or out in the community, the city will look at crime, emergency response, code and regulation compliance, court administration and the perception of personal safety.

In terms of healthy lifestyles in Austin, the city wants to have equal focus on physical and mental health. Although Imagine Austin puts a focus on physical health with an emphasis on park space, pedestrian facilities and bike ways, the city has also placed a focus on the resources offered for mental health. The city will look at the prevalence of disease and unhealthy conditions, the quality of health care, parks and recreational access, environmental quality and food security as indicators of the city’s health.

As the city looks at decisions its makes in development and budget, it will look at preserving the aspects of Austin that make it Austin—such as its intersection of music, art, food and ethnic culture—and being a city where there is something for everyone at every stage of life. As evidence of its success, the city will look at areas such as cultural event attendance; quality of libraries; educational attainment; and the perception from residents of the environmental, cultural, ethnic and learning opportunities offered in the city.

“Believing that city government works for everyone; that it is fair and equitable; a good, continuously improving and innovating steward of its resources; has a high-performing, ethical workforce; effectively collaborates with the public and delivers the results that people expect and an experience they welcome,” is the stated mission of the city’s goal to sustain a trustworthy and transparent government. It will look at areas such as management of finances, human capital, technology and performance, the maintenance of public facilities and infrastructure, and stakeholder engagement.
SHARE THIS STORY