4 things to know about the Frisco Station groundbreaking 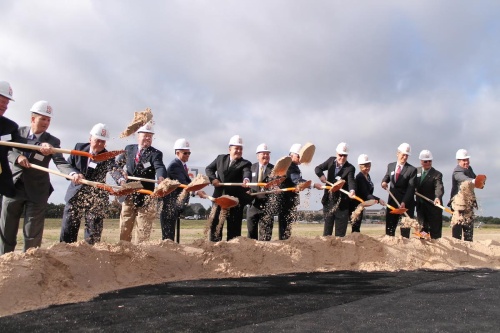 Frisco Station broke ground Tuesday after years of planning the master planned development. City officials and land partners gathered at the site on the northwest corner of Warren Parkway and Dallas North Tollway to commemorate construction beginning on the development. Here are four things to know about Frisco Station.


1. Frisco Station is the largest development along the $5 Billion Mile. At 242-acre, Frisco Station will be the largest master planned development along the $5 Billion Mile at build-out.

The development will include 137,000 square feet of restaurant and entertainment space. There will be a 600-room hotel campus with four hotels, 29 acres of parks and amenities, 2,400 units of luxury urban living, 1.5 million square feet of Class-A office space and a 1 million-square-foot corporate campus. The map illustrates everything planned for Frisco Station.[/caption]

A 228,000-square-foot, Class-A multi-tenant office building will launch the first wave of development in Frisco Station.

The office building is slated for completion in August 2017. Construction on the four hotels is expected to begin in 2017 with the first openings anticipated in June 2018.

“We will be breaking ground on a regular basis," Hillwood chairman Ross Perot Jr. said. "Hopefully this will become a very good habit for all of us to get together and celebrate the growth of this fabulous market."


3. Frisco Station has three development partners that are all private, family-owned businesses.

“In addition to the strategic location and a visionary master plan, Frisco Station’s biggest asset lies in the strength of its three development partners,” Hillwood President Mike Berry said. “Each organization brings a different skill set and track record of success to the development.”


4. Planning for Frisco Station has been in the works since 1962.

The Frisco Station site  is owned by the Rudman Partnership, which is a partner in the development.

“We have been working on this land for so long and we are so excited to be part of this development,” Rudman Partnership general manager Trey Sibley said.

The Rudman family bought the land in 1962, and over the course of those years, Sibley said the company had looked at more than just a few possibilities for development.

“But sometimes when you chase things it doesn’t always work but we’re happy to be where we are and we’ve been a lot of time trying to get to today,” Sibley said.
SHARE THIS STORY