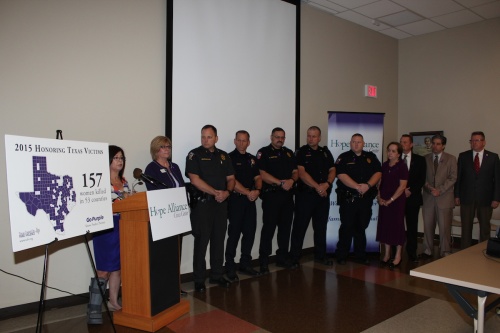 October is Domestic Violence Awareness Month and local organizations are trying to shed light on these issues.

October is Domestic Violence Awareness Month, and 157 women were killed in Texas during 2015 due to domestic violence murders, including three in Williamson County, the Texas Council on Family Violence said.

According to TCFV, a nonprofit organization that works to end family violence through advocacy, partnerships and services for those affected, that is a 19 percent increase in deaths since the creation of its project 25 years ago. That number is also up from 132 domestic violence related deaths in 2014, TCFV said. TCFV released its new report on Oct. 3 at a news conference.

TCFV and Hope Alliance Crisis Center, which works with victims of sexual and domestic violence and their families across Central Texas, are teaming up to bring awareness to domestic and sexual violence issues, as well as to raise money for a new shelter.

Hope Alliance's current shelter, located in the Round Rock area, is too small and outdated, having been built 35 years ago, according to a press release. Hope Alliance said land has been donated, but funds for the construction of a new shelter still need to be raised.

“Research shows that shelters save lives,” said Patty Conner, CEO of Hope Alliance in Williamson County. “While I can’t say that the three women who were murdered in Williamson County would have survived if they sought help at the shelter, we do know when women seek help from organizations like our program, they are less likely to be killed.  We currently have to turn away 45 families a month because we have no room. When women are in the most danger and we have no room, there can be devastating consequences.”

Hope Alliance has created an Allies in Hope program to bring community awareness to these crimes, the press release stated. The program will ally with businesses, media outlets and schools to educate the public.