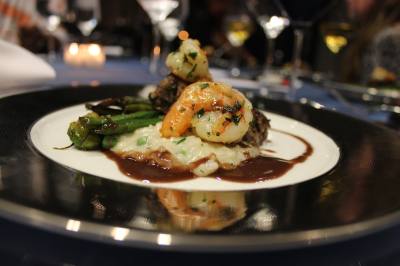 Tre Wilcox made an English pea risotto with seared beef and shrimp with veggies and balsamic vinegar.

With 20 years of experience in the kitchen and on screen, Tre Wilcox, who appeared on the TV show "Top Chef" and competed in Food Network’s "Iron Chef America," started a new concept of cooking classes called TRE Wilcox Cooking Concepts. The new venue, located at 8200 Preston Road, Ste. 135, in Plano, opened March 14.

"TRE" stands for the basic tenets of cooking: technique, recipes and execution, said Wilcox, who said he wanted to bring that philosophy of cooking to local food enthusiasts.

“Cooking Concepts was the only way I could figure out how to combine two of my favorite things: food and teaching,” Wilcox said.

TRE Wilcox Cooking Concepts features fully equipped, 3,200 square foot space with four stocked demonstration kitchens along a sidewall, a chef’s kitchen and four plasma screens on one wall. The screens are used for students so they can watch the chef and teacher cooking. Cooking classes range from groups of 20, couples classes and demonstration classes. The cooking classes will include a three-course menu with instructions, appetizers and copies of the recipes.

Wilcox and his staff will also be present to guide students through the process and also conduct demonstration classes. Assistant chefs will also conduct some classes, Wilcox said.

Kenny Wynn, TRE Wilcox Cooking Concepts sales manager, schedules private events and manages the cooking classes. Growing up in San Antonio, Wynn said he wanted to experiment with different styles of cooking and went to the University of North Texas to study hospitality management. He started working with Wilcox in 2009 at Loft 610, a former restaurant located in Plano, and later joined Wilcox in setting up the new concept of cooking classes that can also serve as an activity for team building.
SHARE THIS STORY

Plano Music House planning to open by end of September