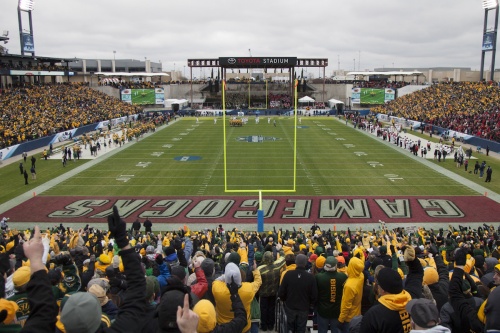 The NCAA Division I Football Championship title game will continue to be held at Toyota Stadium in Frisco through 2020, NCAA officials announced Jan. 8.

“The Division I Football Championship Game has been a world-class event for the past five years,” Wilson said in the news release. “The committee has received overwhelmingly positive feedback from all of our past participants and countless fans. We look forward to continuing our relationship with the city of Frisco, Hunt Sports Ventures and the Southland Conference.”

The NCAA said more than 95,000 fans total have attended the championship game in Frisco throughout the past five years, with an average crowd of more than 19,000 people. Tickets for three of the five games have sold out. The 2016 game marks the sixth consecutive year the game has been held in Frisco.

“We’re thrilled to host the NCAA Division I Football Championship Game for the next four years,” said Frisco Mayor Maher Maso in the news release. “Frisco is a great place for this title game because our community is dynamic, collaborative and sport-centric. We’re a fast-growing community and extremely proud of how this event has grown with us. The FCS championship enhances our reputation as a tourist destination while providing entertainment and economic benefits for our residents. We’re looking forward to continuing our partnership.”

Marla Roe, executive director for the Frisco Convention and Visitors Bureau, said the estimated economic impact to the region from the event is expected to be $6.8 million.
SHARE THIS STORY