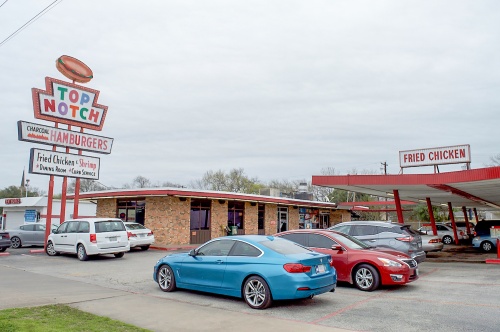 MA Partners, developers of the Co-Op District in Hutto, announced Feb. 21 that Top Notch Burgers is going to open its second location in the mixed-use development. This is the first expansion for Top Notch Burgers, which has been in business since 1971.

Show map
MA Partners, developers of the Co-Op District in Hutto, announced Feb. 21 that Top Notch Burgers is going to open its second location in the mixed-use development. This is the first expansion for Top Notch Burgers, which has been in business since 1971.

“We know plenty of folks in Hutto who drive to Austin just to visit Top Notch, and we envision being met by friendly faces the day we open our doors,” said Kelly Chappell, owner of Top Notch Burgers.

Top Notch Burgers is known for its classic diner-style menu with drive-in style eating and car hops. The iconic Austin burger joint was also featured in the hit 1993 movie "Dazed and Confused".

Chappell told Community Impact Newspaper that he expects Top Notch Burgers to open its Hutto location by early 2020. The restaurant's patio will overlook the Co-Op District's amphitheater in the development's western section, according to Chappell.

"I want to stay as true to the original design as possible, down to the brick and the booth and the decor inside," Chappell said. "I really believe that we have something special and it is authentic. Why would we try to change that?"

In 2010, Chappell and other partners purchased Top Notch Burgers from Frances Stanish, who opened the restaurant in 1971. Stanish passed away in 2011.

"I had a very long heart to heart with the matriarch of the family [Stanish]. One of her dreams was to see a second Top Notch," Chappell said. The Top Notch owner said he remains in contact with the Stanish family and reports they been supportive of the expansion.

"They’re excited for us. They're on board and not only approve of but encourage what we do with Top Notch," Chappell said.