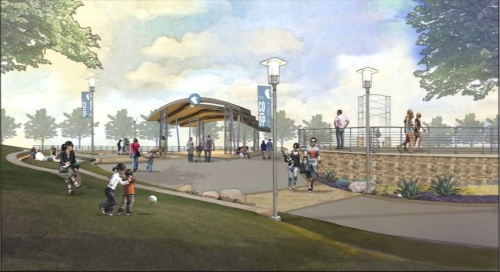 Updated 4:13 p.m.: According to Hutto Public Information Officer Eliska Padilla, MA Partners is footing the cost for the construction of the new city hall as part of the development agreement with the city, a deal worth up to $6 million. Per the agreement, MA Partners will build the city hall and transfer ownership of the property to the city in exchange for the Co-Op District property. MA Partners is additionally mandated to develop the property as part of the agreement.

Originally reported: The Hutto City Council and those in attendance at Thursday's meeting previewed updated engineering and architectural designs for the Co-Op District, a $210 million mixed-use development on the north side of Hwy.79, just west of downtown.

"We’re way ahead of schedule," said Bob Wunch, lead developer on the Co-Op District. "We’re currently in negotiations on 60,000 square feet of leasing. We should have all of those wrapped up by May."

The previewed designs included plans and illustrations for the Co-Op District's amphitheater, an outdoor entertainment area located at the western edge of the development property that is expected to hold approximately 1,500 persons for capacity.

The development's leasing agency, McAllister & Associates, has previously discussed filling programming for the amphitheater with music concerts and other entertainment on the weekends while bringing in theater and music performances from Hutto ISD students to perform during weeknights.

The development team also presented renderings and floor plans for the new Hutto City Hall and Hutto Public Library, which will be adjoined in one building at the northernmost end of the Co-Op District. Both buildings will be considerably larger than the municipal buildings the city currently operates out of.

Floor plans for the new city hall include a mezzanine and City Council chambers that can seat up to 200 people, if needed. The new library features several partitioned meeting rooms, a children's area and a connected outdoor area. Construction on the city hall building is scheduled to begin in April with a scheduled move-in date in December.

According to Hutto Public Information Officer Eliska Padilla, MA Partners is footing the cost for the construction of the new city hall As part of the development agreement with the city, a deal worth up to $6 million. At its completion, ownership of the property will be turned over to the city of Hutto.

Some council members directed the development team to consider adding an additional door to the city hall building to address congestion concerns and simplify access to the library.

Hutto City Council was last shown updates on the Co-Op District property at a Nov. 16 meeting, during which early landscaping and road designs were previewed. In their presentation Thursday night, developers spoke about exploring raised pavement at crosswalks, essentially turning those intersections into speed bumps. That meeting came two weeks after the Nov. 2 groundbreaking of the Co-Op District property.

In the time since, developers have begun demolition work and the first phase of construction, which included the relocation of the site's iconic silos to the southern end of the Co-Op District property. According to Wunch, construction crews have worked on grade implementation in the time since. Wunch also said his company has submitted plans for horizontal development on the site.
SHARE THIS STORY