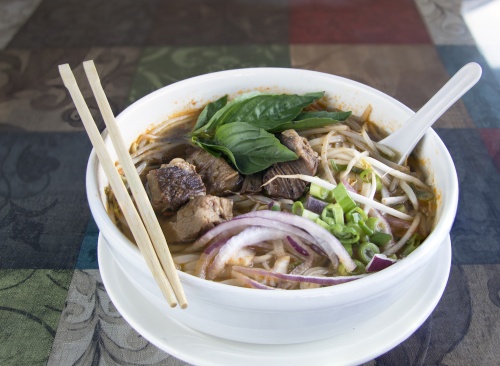 Guay Tiew, $9, is a Thai noodle soup with rice noodles, bean sprouts, red onions, and cilantro in beef broth with an option of stewed beef or steamed chicken.

Show map
The owners of the now-shuttered NG BMT banh mi shop are celebrating the recent renovations and name change of another North Austin restaurant they bought in 2017.

Y and Nguyet Quach closed NG BMT in late 2016 at 8557 Research Blvd., Austin, after failing to find a new spot for the shop. The shop originally opened in 2014, and the couple previously owned the Hao Hao Chinese Restaurant.

In April 2017, the Quaches took over ownership of Chang Thai Thai Cuisine at 13000 N. I-35, Austin. Since then, they said they have extensively renovated the restaurant and revamped the menu. A grand opening was hosted July 24 to also celebrate the name change to Ng Cafe.