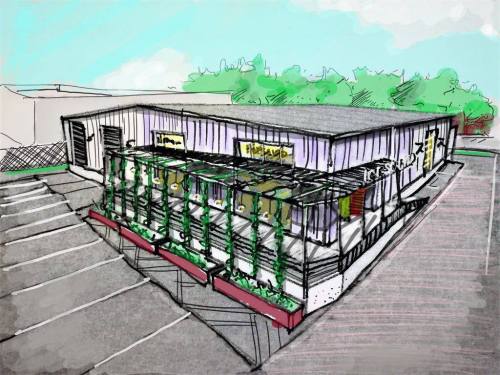 Hopsquad Brewing Co.'s brewery will include a patio with fans and greenery as depicted by a rendering.

Located at 2307 Kramer Lane, Austin, at Braker Lane in a warehouse that formerly housed Texas Office Products and Supply or TOPS, Hopsquad will include a taproom, patio area and food trucks, founder Alex Limon said.

Alex Limon said he and his cousin, Cesar Limon, plan to run Hopsquad together. Limon said most of his experience has been in home-brewing as well as a training course at Big Choice Brewing in Colorado.

Born in New Jersey and raised in Guadalajara, Mexico, Limon attended college in California and also lived in New York before settling in Austin in 2014.

“There’s really no place like Austin," he said. "I love every aspect of it. We wanted [our brewery] to feel as local as possible."

With names such as Professor Pleasant Pale Ale that is inspired by Pleasant Valley Road, Dr. Montopolis Pilsner giving a nod to Montopolis Drive and Countesse Duval Saison bringing Duval Road to mind, Limon said he wanted to create a “squad” of characters that evoke an Austin feel.

The name of the brewery itself reinforces the idea of a collection of beer “identities.”

“We decided on Hopsquad [because] we wanted to make each beer its own identity but part of a bigger unit,” Limon said.

Eventually Limon said he wants to develop beers inspired by the places he has lived previously and incorporate flavors such as mezcal, mole sauce and even tiramisu.