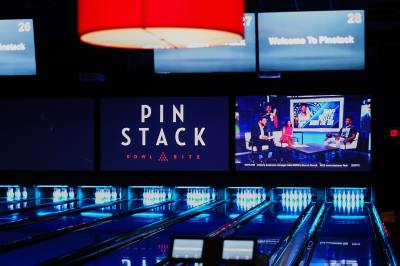 Pinstack, set to open in North Austin in late 2019, will feature 26 bowling lanes as well as bumper cars, video games and more.

Show map
Entertainment Properties Group, a hospitality and entertainment company with several entities across Texas, announced April 10 it is building a Pinstack location in North Austin.

Pinstack, with three locations in the Dallas area, is a 26-lane bowling alley with other entertainment options, including a rock climbing wall, a rope course, a laser tag arena, bumper cars, video games, pinball machines and a giant foosball table.

The Austin Pinstack lanes, to be located at 500 Canyon Ridge Drive, Ste. 140, Austin, will also feature two full bars with craft cocktails, dozens of wine selections and 24 imported and domestic draft beers, according to a press release. A restaurant with a full menu and a weekend brunch menu will also be located inside the Austin Pinstack location.

Construction on the new location began in late March, and Entertainment Properties Group expects to open its lanes sometime in late 2019.

The city of Austin is now taking public input on future mobility enhancements and cultural installations along the Burnet Road corridor.