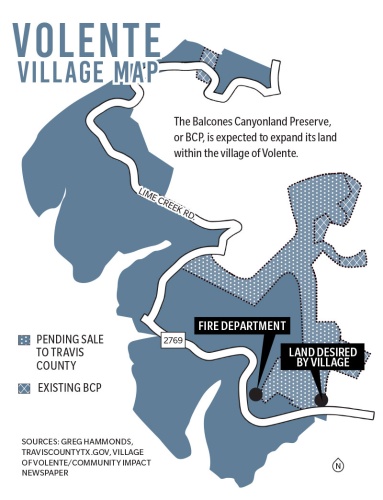 Travis County is in the process of purchasing approximately 17 percent of the land within the village of Volente for the Balcones Canyonlands Conservations Plan.

Greg Hammonds is a partner for Grason Volente Investments, the landowner of the property, and he said he has a fully executed agreement with the county for land. The 223-acre property previously made up most of a roughly 300-acre planned development district, or PDD, set up in 2006 with the plan to incorporate around a home per acre, according to Hammonds and Volente Mayor Ken Beck.

“Getting the development approvals from the village of Volente dragged on for years,” Hammonds said. “By the time we reached an agreement with the village, the market had turned. As the market has returned, we chose to sell the property rather than develop it."

Hammonds said after listing the property, Travis County approached him to purchase it. On Jan. 30, Travis County Commissioners Court approved the purchase of the land as part of the Balcones Canyonlands Conservation Plan, reserving up to 12.6 acres for possible sale or lease.

Covering over 31,000 acres, the Balcones Canyonlands Preserve was created to protect endangered species, including two birds, according to Travis County’s website.

ECONOMIC EFFECTS
Now with the addition of the PDD property to the preserve, village leadership must consider how the loss of a potential housing development could affect the Volente.

“The village is not going to immediately lose any property tax from that land,” Beck said. “But it was the future monies that were coming in, the population that would almost double the village, the potential impact that could have on the village on both the residential side and the commercial side.”

City Council Member Bill Connors said the sale of the property would be “both a blessing and a curse.”

“People were very concerned about the impact of so many homes being built out here, and they’re happy to see them go away,” he said.

However, Connors also said the sale could shift future economic growth in Volente. He said losing the potential for new homes takes away the ability for businesses to provide a service primarily for locals, and could compel them to advertise outside the village for business, creating a tourist destination.

“Many of the residents do have a desire for local restaurants, local stores [but] do not want a whole lot of expansion of what are called tourist or destination venues," he said.

Adam Weedman is the owner of Beachside Billy’s Restaurant and Waterpark. He said the company does most of its business from May-August with customers from outside Volente.

“This will be a huge loss for the village in terms of revenue and a huge loss in terms of any commercial growth such as restaurants, shops [and] grocery stores,” he said.

COUNTY NEGOTIATIONS
Volente City Council Member Christopher Wilder said that he does not want to infringe on private property rights, but that the county went into the purchase without considering how it would affect residents. The village is negotiating with Travis County for a portion of the former PDD to lease or own for public use, Beck said.

Hammonds offered the Village of Volente approximately 3 acres of land on Lime Creek Road, he said. The county offered the village 23 acres of the PDD land behind the Volente Volunteer Fire Department on FM 2769. This could include 20 acres to lease and 3 acres for the village to own through a land swap for the property on Lime Creek Road, Beck said. Volente’s concerns with that offer include difficult access—the village’s estimated cost to build a road up to the 3 acres is $150,000, Beck said.

Travis County declined to comment due to the pending land sale.