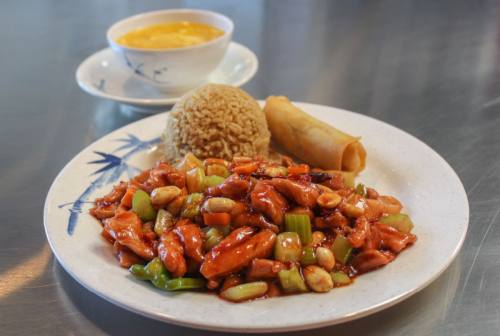 Restaurant co-owner Brandon Blevins said he wants his diners to leave with plenty of food in their bellies and smiles on their faces.

Woks It 2 U, a Chinese restaurant in Cold Spring Marketplace in Leander, has a dinner menu known for large portions, according to Blevins.

“Three plates usually feed a family of six,” he said of the restaurant, which has entrees ranging from $7.50 for noodles to $13.95 for sesame shrimp. Most dishes, however, are priced in the $8.95-$9.95 range, according to the menu. Less expensive dishes are offered during lunch, he said.

Woks It 2 U is also known for its employees wearing—and a few customers buying—T-shirts with punny sayings such as “You’re the dumpling of my eye” or “Don’t hate me because I’m Buddhaful.”

“We like to keep it light here,” Blevins said of the restaurant, which has a corner dedicated to T-shirt and hat sales.

He and his wife, Le, opened the restaurant in April 2017, incorporating many of the recipes Le’s parents used when they ran China Express, a restaurant on Riverside Drive in Austin, before they retired in 2015. The restaurant still exists under new ownership.

Blevins said what makes his kitchen unique is its stove, with propane-fueled, 150,000 British Thermal Units, or BTU, burners that can cook a stir-fry dish in mere seconds.

“It’s like cooking on a jet engine,” Blevins said.

While the restaurant has plenty of seating, Blevins said most of his business is to-go.

Blevins, who lives only a few blocks from his restaurant, said Woks It 2 U may eventually expand into Liberty Hill, Georgetown or Round Rock.

“A lot of people think we’re a chain, but we’re not,” he said. “We might open another one.”