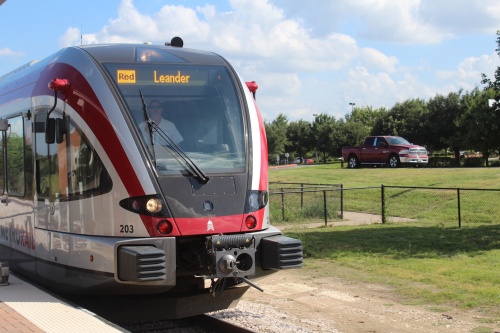 The MetroRail arrives at Leander Station.

With Leander City Council set to consider its relationship with Capital Metro at its July 18 meeting, residents and community members are expressing concerns about what the removal of public transportation could mean for the city’s future.

The Leander Station Park & Ride off Metro Drive allows people to park their cars and take a bus or rail to and from Austin. Many riders returned to their cars Wednesday evening to find flyers left on their windshields urging residents to “save our public transportation” and attend the Thursday meeting.

Lu Ann Bradshaw, a Leander resident who was exiting the MetroRail Wednesday, said she is not happy at all about the possibility of Leander withdrawing from Capital Metro. She said she takes the train to work in downtown Austin five days a week.

“We moved to Leander because of the train station,” Bradshaw said. “We bought our house five minutes away [from the station].”

An item on Leander City Council’s Thursday agenda is to authorize the mayor and interim city manager to negotiate an agreement with an attorney for legal services regarding the “possible withdrawal” from Capital Metro.

One percent sales tax levied by the city of Leander and other service members in the Austin area funds the transit agency. Mayor Troy Hill said he would love to stay in Capital Metro but thinks the city is paying the agency too much for what it receives.

“We’re going to let the voters decide,” Hill said. “If they want to stay in with substandard service then so be it. This was decided so long ago. … [There is] a whole new set of voters and taxpayers.”

Capital Metro was established through voter referendum in 1985. In order for Leander to leave Capital Metro, Leander voters would have to approve the withdrawal.

Another Williamson County city, Round Rock, contracts with Capital Metro to provide transit services, according to Stratton, but is not a full-fledged member.

“There is a difference between Round Rock and Leander because Round Rock has never been a member, and they pay for it out of their city budget,” Stratton said.

Stratton said Leander has benefitted from being a full member of Capital Metro.

“All of the infrastructure built in Leander over the years has been built because Leander is a full-fledged member of the Capital Metro service footprint,” Stratton said. “The station that is in Leander that first started out as a bus depot and was later expanded into the train station was built in large part exclusively because of the relationship Leander has with Capital Metro.”

Leander contributed around $5.1 million in sales tax to Capital Metro in fiscal year 2017-18. Data from Capital Metro shows that servicing Leander in that period cost the transit authority nearly $9 million — about $2 million in bus service, more than $7 million in rail service and more than $100,000 for a handful of MetroAccess clients and rideshare groups.

In Cedar Park, voters elected to leave the transit authority in 1998. The city is currently in the middle of a transit study, evaluating the needs, costs and support for viable transit options through public meetings and surveys.

Leander Council Member Michelle Stephenson said she worries what the removal of Capital Metro would mean for development in the city. In 2005, City Council created the city’s transit-oriented development, a district intended to encourage pedestrian-friendly growth.

“The whole idea back then was that we’ll bring the MetroRail in and create a downtown and TOD,” Stephenson, who was elected to City Council in 2015, said. “[The City Council] was really forward thinking on that.”

ACC purchased a 100-acre property in the TOD in 2010 for $12 million, and in 2014 voters approved a bond proposition that included the building of Leander’s San Gabriel Campus.

Vic Villarreal, an adjunct professor at ACC, was a member of Leander City Council between 2005-09 and later served as an ACC board member. He ran against Hill in the 2018 Leander mayoral race.

“One reason [ACC] decided to purchase land during that time in Leander and even build a campus was because of the strong relationship Leander had with Capital Metro,” Villarreal said. “It was vitally important back then and today that not only buses but the rail remain in Leander for that campus and the entire TOD.”

Villarreal said he thinks the connection to Austin Capital Metro provides is unique in a suburban city and attracts development such as ACC, St. David’s and Northline, a mixed-use project planned for the city.

“Getting rid of CapMetro I think isolates the city in a very negative way, and it’s bad public policy to isolate Leander in that regard,” Villarreal said.

Capital Metro’s MetroRail is in the process of receiving a federally mandated upgrade throughout its system. There is no Saturday service on any rail at this time due to these upgrades, but buses are available while the rail service is curtailed, according to Stratton.

Stratton said while these upgrades are being made, Capital Metro is using this time to “beef up” its system with the construction of the downtown station and improvements to tracking.

“It means we can run more trains more frequently from Leander to Austin and back,” Stratton said.

Adding pickup service in Leander is also on Capital Metro’s proposed budget—which gets approved mid-September—for the next fiscal year, according to Stratton.

“It’s an on-demand pick-up service similar to Uber or Lyft, where a resident of Leander can use an app or pick up the phone and make a call and a shuttle will take them to their destination within the defined service area,” Stratton said. “Leander would be responsible for setting the geographical bounds of the service area and the frequency it would run based on the budget, based on what Capital Metro provides them in terms of money.”

Stephenson said while she is gravely concerned about what withdrawing from Capital Metro would do to the city, she has been disappointed with Capital Metro. She said she was disappointed in a presentation Capital Metro officials gave to Leander City Council in May outlining future services.

“They talked about improving service to Leander, and what they are offering instead of more run times on weekdays and weekends, they’re offering this ‘Uber-Lyft minibus.’” Stephenson said. “That will be good — better than we got now. If they would offer more service to us, rather than just a few hours in the morning and evening and some buses for the commuters, then people would be a little happier about that.”