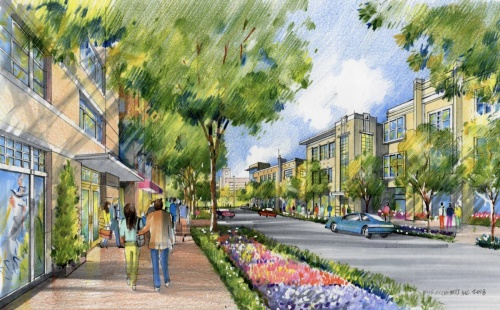 Initial renderings for Mel Mathis Boulevard in the Northline development were presented at a May Leander Planning & Zoning Commission meeting.

The council also approved zoning changes within certain sectors of the project unanimously.

After months of discussion and planning, requests for Northline—a proposed mixed-use development in Leander’s transit-oriented development district, or TOD—are set to go before City Council tonight.

The TOD was created in 2005 to encourage pedestrian-friendly growth and includes projects such as Austin Community College’s San Gabriel campus and St. David’s Emergency Center and upcoming hospital.

Northline is proposed to be a walkable town center located south of San Gabriel Parkway between US 183 and Toll 183A created by Tynberg LLC.

Originally, the development encompassed around 70 acres but grew to around 115 acres after developer Alex Tynberg purchased additional land on the west side of Mel Mathis Boulevard.

Architect David Schwarz, who is working with Tynberg, said at a Leander Planning & Zoning Commission meeting May 24 that adding the extra acreage means the development will have control of Mel Mathis Boulevard and can rework it as a local street that would function as "Main Street."

“[The purchase] turned this from an interesting project to an exciting project,” Schwarz said. “Now we can look at Mel Mathis very, very differently.”

At the zoning meeting, Schwartz presented initial renderings of the project including a public square, which he said draws inspiration from “classic American” town squares, with retail and restaurant components along the first floor of buildings surrounding the square. Upper floors could contain offices, and the area near the public square could also include a hotel and residential housing.

Parks are incorporated throughout the proposal among residential, retail and office areas. Office space is also slated to possibly run along Toll 183A and San Gabriel Parkway. Multifamily components, low-rise mixed use, garden apartments and townhomes are all incorporated into project.

Leander’s council members are scheduled to receive a presentation about the economic impact analysis of Northline during a work session starting at 6 p.m. tonight, according to meeting documents.

During the regular meeting beginning at 7 p.m., the council will:

The development agreement would set the terms for how the city of Leander would fund the creation of infrastructure for the project, including $15 million in bonds issued to Northline to help pay for public improvements, such as water infrastructure, streets and parks.

The city created a tax increment reinvestment zone, or TIRZ, to help finance development in the TOD by reimbursing developers that create public infrastructure. The reimbursements are typically funded through tax revenue incrementally over time.

Providing public funding for Northline infrastructure at the beginning of the project differs from the usual way the TIRZ functions. City spokesperson Mike Neu said the $15 million would be reimbursed to the city through the TIRZ.

City Council could vote on a final decision on the development agreement at Thursday night’s meeting, which will be held at Pat Bryson Municipal Hall, 201 N. Brushy St., Leander. Residents may also watch the work session and meeting online at www.leandertx.gov/video.