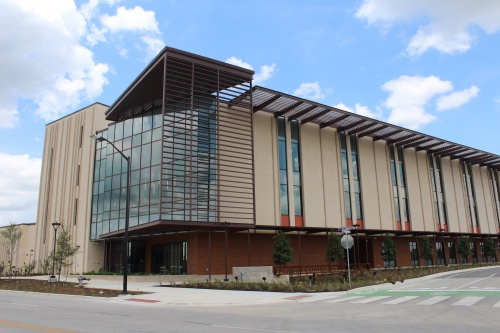 Austin Community College held a grand opening and a ribbon cutting for its newest location, the San Gabriel campus in Leander, on Wednesday.

Austin Community College held a grand opening and a ribbon cutting Wednesday for its newest location, the San Gabriel campus in Leander.

The San Gabriel campus has been under construction since 2016 between Toll 183A and Mel Mathis Boulevard, although plans for the campus had been in motion for several years. In 2010, the community college purchased about 100 acres within Leander’s transit-oriented development district, which is intended to become the city’s downtown walkable district. The campus was funded by 2014 voter-approved bonds totaling $60 million.

The campus caters to general studies and includes a combination of traditional classrooms and hybrid classrooms, or ones with desks and computers, as well as labs for chemistry and biology. The campus also has a 175-seat ACCelerator lab, or a technology-enhanced learning environment, as well as a library, an outdoor rooftop terrace and community spaces.

Several representatives with ACC, Williamson County, the city of Leander and Leander ISD spoke before the ribbon cutting on Wednesday, as did several elected officials.

“As Williamson County continues to grow and attract more employers, we must be able to supply a workforce for those companies,” she said. “ACC will play a vital role in meeting that need.”

Misty Valencia, a Leander High School senior who will graduate next weekend, said she earned dual credit through ACC in high school and plans to attend ACC San Gabriel and transfer to The University of Texas in the future. She said her goal is to be the first person in her family to finish college.

“I had classmates who wanted to participate in the dual-credit program through ACC, but the campus was too far for them to go,” she said. “The San Gabriel campus will be more accessible for seniors who want to take dual-credit classes and be better for seniors who aren’t ready for university yet.”

The campus is now open for students who wish to register for the fall 2018 semester.
SHARE THIS STORY