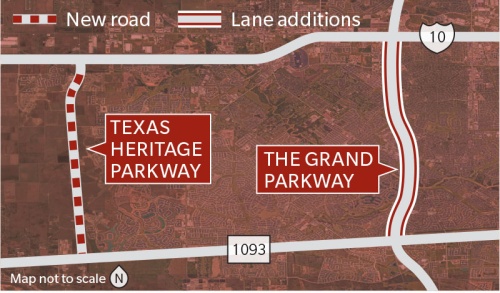 The Texas Department of Transportation is developing  plans for two highways between I-10 and Westpark Tollway/FM 1093: to widen the Grand Parkway and build the Texas Heritage Parkway. The first project will include new frontage road segments and ramp modifications to improve traffic flow.

Meanwhile, the $48 million Texas Heritage Parkway plan moved forward in 2017 as developers in the area offered to pay 50 percent of construction costs. Fort Bend County and the cities of Katy and Fulshear will pay the remainder. The parkway will be on the west side of the Katy area.

Blanton & Associates is conducting studies related to the environmental and noise impact of proposed changes to the Grand Parkway. Andy Meyers, commissioner for Fort Bend County Precinct 3, said he has heard noise concerns from area residents.

Prevention tactics may include sound walls or longitudinal cuts in the roadway. Land for the Texas Heritage Parkway project has also been acquired, Brawner said.

After studies are completed and a final design is approved for the Grand Parkway widening, construction is expected to begin in 2022 and last two years, TxDOT officials said.

The agreement between the land developers and Fort Bend County for Texas Heritage Parkway is expected to be approved by early February. Construction design will take nine months, and work will begin in the fourth quarter of 2018, said attorney Richard Muller, whose law firm is handling the legal processes for the project.

TxDOT also began a $2 million study regarding the Hwy. 36A project in November. The project would create a trade route connecting the Dallas area and San Antonio area to Fort Bend County and Port Freeport in Brazoria County via roads, rail and the Houston Ship Channel.