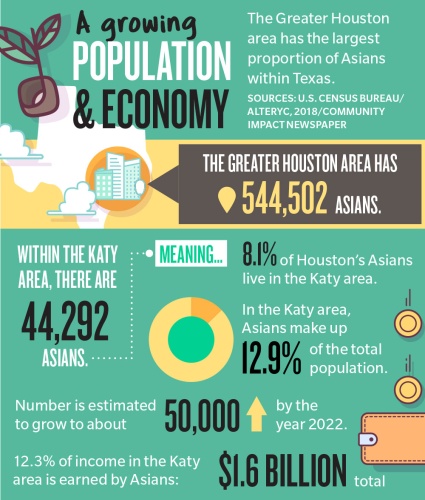 Correction: Phyllis Ly's name has been corrected in the story below.

The Katy area’s Asian population is expected to grow by about 10,000 people over the next four years, and with the opening of Katy Asian Town, the region’s appeal is only increasing for Asian businesses. This growth is not restricted to restaurants and includes Asian corporations, retailers and service providers.

“From a big picture perspective [the Greater Houston area] is a very desirable location for Asian people to come to,” said Milton Young, president of the Houston Asian Chamber of Commerce.

Lance LaCour, president of the Katy Area Economic Development Council, said via email that Asian growth in Katy is not limited to Katy Asian Town. LaCour said the EDC has seen growth in the Asian community throughout Katy.

Young said Asians have come to the Greater Houston area in waves and have gone to different areas, seeking opportunity. As portions of the Greater Houston  area developed, Asian immigrants would gravitate to other areas, sticking together in communities.

In the middle of the 20th century, old Chinatown in East Houston was the hub, then Bellaire, followed by Sugar Land, then Katy, Young said. He said immigration  was spurred by events such as the Vietnam War and similar issues in Asia.

Young said Asians shifted to Katy because it has more space to grow than Sugar Land. The Katy area has opportunities in  multiple industries, especially the medical and energy sectors, he said. That growth drives demand for services such as restaurants, physicians, real estate and accounting.

Phyllis Ly, owner of Bambu Katy, a drink and dessert shop on Spring Green Boulevard, agreed with Young that Asians are moving to Katy.

“I hadn’t heard of it referred to as ‘Sugar Land 2.0,’ but the conversation among Asian business owners reflects that,” Ly said.

Ly said Katy is a logical step for Asians after Sugar Land became mostly developed. Asians had moved to Sugar Land because appealing malls and business developments had developed there, Ly said. When those spaces filled up, Asians looked at other options, and Katy offered the diversity and open space for developers looking to build. Katy Asian Town has been a hub for Asian development and a lure for Asian interest, she said.

Josie Lin of Re/Max United, the leasing agent for Katy Asian Town, said the development has 51 suites. H Mart, an Asian grocery store, anchors the shopping center. The development will have 40 to 45 stores once filled, Lin said. It broke ground Jan. 2017 and Lin said she expects all suites to be leased by the end of 2018.

The growing Asian population in Katy is drawing expansions of businesses from throughout the Greater Houston area, Young said. Asian businesses near Houston see a growing base in Katy to serve, he said. Katy Asian Town is another factor for Asians to consider opening businesses in Katy, he said.

“I also did some research on where Asians, especially young Asian people, are coming to,” Chen said. “Sugar Land is too packed, [and this business] concept is a very young people thing. That’s why I picked Katy, because Katy is growing.”

Chen said a Chinatown in Katy was part of what drew her to Katy Asian Town. She said she is happy to be part of the development, especially now that H Mart has opened. She said business was slow prior to H Mart opening Sept. 21.

LaCour said Asian businesses in Katy include corporate sites. Businesses such as TMEIC, a joint venture between Toshiba and Mitsubishi Electric; Kobelco, a distribution and sales firm; and InfoTM, a Japanese company, are also present.

“It isn’t just about restaurants,” Lin said. “It’s about services. Services are needed in the Katy area, and Asians can fill that gap.”

Young said the growth is not limited to East Asians. Businesses such as The Medical Clinic at the Ranch, which opened June 25 and is run by Dr. Vijaya Dwibhashi and Dr. Madhavi Prasad, reflects that.

A Kinokuniya bookstore is coming to the Katy Grand shopping center, according to developer NewQuest Properties. The Japanese store will join Asian-owned chains such as Daiso, Z Tao and 99 Ranch Market.

Asian restaurants are prevalent throughout the community, Ly said. She said the Katy community has been very welcoming toward hers and other Asian-owned businesses.

Katy-area residents are still learning about the cultures they are being exposed to with the wave of Asian migration to the Katy area, Ly said. She expects Katy will learn about those cultures as Asians integrate into the community.

Educational businesses and services for special needs are part of the Asian business mix too, Ly said. Her cousin, Jodie Fung, is a speech pathologist and is opening a speech therapy business called Growing Speech in Katy.

Kumon, a Japanese-owned tutoring company, is in the Katy area, Young said. Asian Chamber of Commerce members Allegiance Bank of Texas, Texas Diamond Tools and Vien Dong, a newspaper, are also located in the Katy area, he said.

Restaurants will remain visible in the market as Asian businesses open in Katy, Lin said.

“Based on Katy’s household income, a lot of people can afford the nicer food places [in Katy],” Lin said. “[That is] one of the reasons those big restaurants start to have a lot of expansion over there.”
SHARE THIS STORY