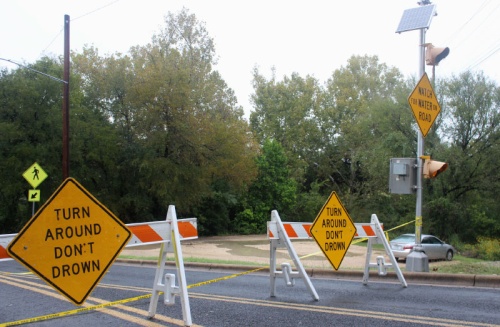 The city of Katy Office of Emergency Management stated in a Facebook post the city is under an areal flood warning until 1:30 a.m., Sept. 20. Although heavy rain has moved out of the area, flooding is ongoing and waters will be slow to recede.

"We are not anticipating the development of more heavy rain at this time, but we will continue to monitor the radar and models," the post states. "Other areas around the City of Katy have been impacted with heavier amounts of rain."

According to Fort Bend County Office of Emergency Management, the flash flood warning has been extended to 5 p.m. for Fort Bend County. About 4-6 inches of rain has fallen over the county since Tuesday. Additional rainfall could range from 1-4 inches.

According to a Facebook post from the U.S. Army Corps of Engineers Galveston District, the Addicks and Barker watersheds have received 3-7 inches of rain over the past three days. The gates were closed on Sept. 17.

The Corps expects a total of 3.5 inches of precipitation over the next two days, and plans for the gates to remain closed through the morning of Sept. 21.


The NWS has issued a flash flood warning at 2:54 p.m. for central Harris County effective until 4:45 p.m. Rainfall is expected to be 1-2 inches during this time period.

The Harris County Flood Warning System reports that flooding is likely at South Mayde Creek at Greenhouse Road as of 2:57 p.m. The stream elevation is at nearly 109 feet. Flooding is likely at 107.9 feet. In the past 24 hours, the gauge has measured 4.6 inches of rainfall.

At 3:10 p.m., the city of Fulshear reported on Facebook that roadways are clear and passible.

At 1 p.m., the city of Katy Office of Emergency Management reported on Facebook that heavy rain was moving south.

A flash flood warning until 3 p.m. is in place for northern Fort Bend County and the city of Katy, according to both entities’ office of emergency management Facebook pages.

Locations that will experience flooding include, according to the post:


In the past 24 hours, the Katy area has experienced between 0.12 to more than 3 inches of rain, according to the Harris County Flood Warning System as of noon.

The system recorded more than three inches in certain gauges in the Katy area:

There is a high risk of roadway flooding near these area, according to HCFWS.

Jeff Linder, a Meteorologist and director of flood operations at the Harris County Flood Control District of the Harris County, reported on Twitter around 11:50 a.m. there was heavy rain at the intersection of Mason Creek and Prince Creek Drive near Cinco Ranch as well as at Barker Reservoir Dam near George Bush Park. Street flooding is possible near these sites.

The National Weather Service had issued a flash flood warning for southeastern Harris County at 10:30 a.m. until 1:30 p.m. Rainfall may fall at 2-4 inches per hour.

Another flood warning was issued by the NWS at 11:46 a.m. for Cypress Creek at Cypresswood Drive in Harris County. The warning states minor flooding is occurring and is expected to continue.

The NWS previously issued a flash flood emergency for north Houston that will be in effect through noon Thursday, Sept. 19.