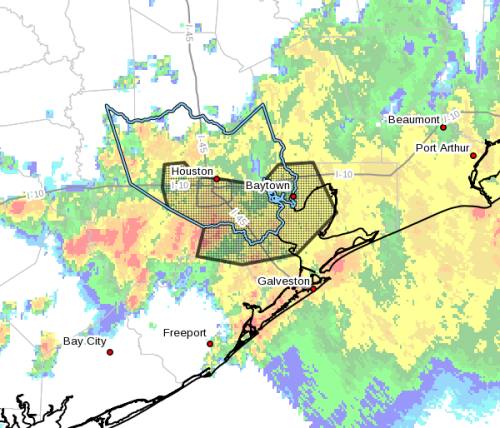 A flash flood warning remains in effect for parts of Harris County.

Harris County Judge Lina Hidalgo announced the issuance of a disaster declaration for the county around noon on Thursday, Sept. 19. According to her tweet, she said this move would help as officials respond to and recover from Imelda.

A flash flood warning for Houston, Pasadena and Pearland has been extended to 4:30 p.m. Rainfall rates of 2-4 inches per hour are occurring in multiple areas, and heavy storms will continue to move across the area through the afternoon, according to the National Weather Service.

The National Weather Service has issued a flash flood emergency for north Houston that will be in effect through 3 p.m. Thursday, Sept. 19. The emergency includes areas such as Aldine, Humble and Barrett.

Under a flash flood emergency, all residents are urged not to travel and to seek high ground if possible and wait until threats of high water have passed, according to officials with the city of Houston. Persistent rainfall is expected over the next couple of hours with rates of 3-5 inches per hour possible.

The NWS has also issued a flash flood warning for Houston, Pasadena and Deer Park through 1:30 p.m. Thursday, advising schools to shelter in place and parents not to attempt to pick up children. A flash flood warning means flooding impacts are occurring or imminent.

Officials with the George Bush Intercontinental Airport announced the airport is at a full ground stop. Houston Police Chief Art Acevedo said rescue boats are being launched at Kingwood Drive.

Service road on JFK @iah is not passable. Please avoid the area. Frontage roads on 59 near IAH and Kingwood areas are flooded. Avoid traveling rain is extremely heavy right now. We are launching boats along with HFD at Kingwood Drive.

Anyone in need of emergency assistance should call 9-1-1, officials said.

Imelda was downgraded to a Tropical Depression late Tuesday evening, but a flash flood watch for much of the Greater Houston area has been extended into Thursday, Sept. 19, with heavy rainfall threats still in place throughout that time, according to the National Weather Service.

The areas to receive the most rainfall on Tuesday included Matagorda County from Midland to near Bay City to Sargent, with much of that area receiving 10-19 inches, according to NWS. Rainfall rates of 2-4 inches are expected today with heaving rainfall coming farther inland from the coast Wednesday afternoon and evening.

Where the most intense rain falls today will depend on where storm bands develop.

"As the ground becomes more saturated, increased rainfall runoff will be possible," according to a release from the NWS. "These factors will play a big role in determining flooding impacts. We will provide updates as more information becomes available, but realize this situation could quickly change."

The heavy rain will continue into Thursday before shifting northeast out of the Houston area on Friday, according to the NWS.

A flash flood watch has been issued for several counties in the Greater Houston area through 1 p.m. Wednesday, Sept. 18, as the area prepares for the recently formed Tropical Storm Imelda.

Imelda made landfall near Freeport around 1 p.m. Sept. 17. The greatest threat to the Houston area will be heavy rainfall that will potentially lead to flooding, according to Jeff Lindner, meteorologist with the Harris County Flood Control District.

A flash flood watch has been issued for Harris, Galveston, Chambers, Liberty, Brazoria, Matagorda and Fort Bend counties, meaning that conditions are favorable for flooding to occur. If the flash flood watch is upgraded to a flash flood warning, residents are advised to avoid travel.

Rain bands are expected to continue into the evening with heavy rainfall possible, according to National Weather Service. Rain is expected to fall mainly in the area southeast of Hwy. 59 from Wharton to Houston to Livingston. The rainfall is then expected to move north over Wednesday and Thursday.