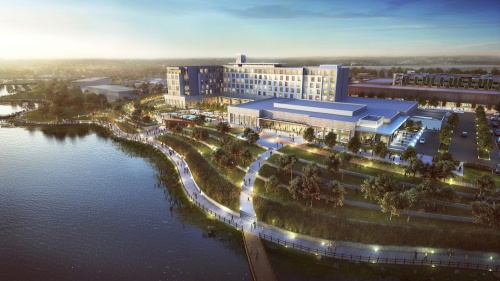 Clarification: The conference center will have a 43,000 square foot of space.

The Katy City Council unanimously approved an amendment to the development agreement for the Katy Boardwalk District development on Jan. 14. The agreement names the long-anticipated hotel operator as the Hyatt Regency, which will be operated by HBH Ventures LLC.

City council members declined to comment on the naming of the hotel, which was not openly discussed in the meeting. A formal announcement will be provided within the next two weeks once the agreement has been executed, Katy Mayor Chuck Brawner said.

Adoption of the agreement followed a closed-door meeting that included council members, Brawner and other city officials. The agreement has a hotel facilities clause that includes a Hyatt Regency-branded hotel and parking facility to be owned and operated by KBH Ventures as a franchisee. The contract requires the roughly 43,000-square-foot conference center with a hotel to include a minimum of 300 rooms, a restaurant, bar, pool and fitness center. Construction of the hotel facility may take up to two years, according to the agreement.

The Katy Development Authority will construct a separate conference center on the site and lease it to KBH Venture to run under the Hyatt Regency name, according to the agreement.

Development of the Katy Boardwalk District is part of the city's plan to make Katy a destination city, City Administrator Byron Hebert said.

An 80-acre lake and 2-mile boardwalk was completed in March 2018 in the 200-acre, mixed-use development after a year of construction, said Kayce Reina, Katy's director of tourism, marketing and public relations. Construction on loft apartments is scheduled to begin in the first quarter of 2019.

The conference center and other amenities is in line with the city's plans to encourage commercial and light industrial development, Brawner said. Adding to the city's tax base with commercial and industrial elements helps the city keep property tax burdens off of residents' shoulders, he said. Property development such as the Katy Boardwalk District, the Amazon fulfillment plant west of town and the recently annexed site for a new Costco Wholesale distribution center all help that goal, he said.