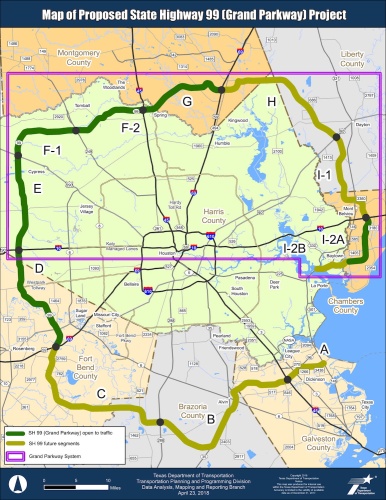 After weeks of uncertainty and outcry from officials around the Greater Houston area, the Texas Transportation Commission voted Aug. 29 to include segments B-D of the Grand Parkway in its 10-year plan to guide transportation projects.

“They put it in there as a toll project, which at least gives it funding opportunities,” said League City Mayor Pat Hallisey, who attended the meeting in Austin.

TxDOT never gave a reason for pulling the $1.28 billion worth of projects from the program.

Cities drafted resolutions and residents sent letters to the commission urging it to keep the segments in the plan. Many said the project is necessary to alleviate traffic congestion, especially during hurricanes that hit southeast Houston the hardest.

Segment A, which is not part of the UTP, would run in League City from I-45 to Hwy. 146, which heads north to link up with other portions of the Grand Parkway. However, despite being on Grand Parkway maps, Segment A has not been considered a “viable project” for some time, according to TxDOT’s website.

State Sen. Larry Taylor, R-Friendswood, said in a July 31 Facebook post that he was sure segments B-D of the Grand Parkway would remain in the UTP. Still, leaders were only “cautiously optimistic” until the vote officially went through, Hallisey said.

Hallisey said officials from Galveston, Brazoria, Fort Bend and Chambers counties all attended to voice support for the Grand Parkway.

“The important thing we got through to them was how important this is to us down here,” Hallisey said. “Now we’ll be at them to get the project moving.”

TxDOT needs to conduct a traffic and revenue study, which it previously started and stopped two years ago, and look at right of way acquisition, along with other preliminary steps, before construction could begin, Hallisey said. Construction might not begin until 2024 or later, but the project would have become far more expensive had it been delayed a decade by not making it onto the UTP, he said.
SHARE THIS STORY