The Magnolia Volunteer Fire Department and Montgomery County Emergency Services District No. 10 saw changes in leadership in March following a lawsuit filed by an assistant fire chief that raised questions about misconduct within the department.

After being placed on administrative leave in February, former fire Chief Gary Vincent announced his retirement March 4, and Precinct 2 Commissioner Charlie Riley requested the resignations of the five-member ESD 10 board in early March. County commissioners approved a new board March 9.

“I just felt it was time with the allegations that were going around, the investigation that was going on ... that they vacated their spot so we could put a new board in place and go in a new direction,” Riley said. “We had a great group of guys at the ESD 10, but we did replace those guys with just-as-good, if not better people from the community, from the business community.”

ESD 10 contracts with and funds the MVFD to provide fire services. However, the board voted March 18 to notify the MVFD of terminating its contract, which would result in the ESD being the direct employer and provider of services. Former ESD 10 Commissioner Tate Robinson claimed contract discussions began prior to the lawsuit’s filing due to growth in the district.
RELATED STORIES

“The conversation had been ongoing for months before there were any issues in the Magnolia fire department,” said Robinson, who had served for four years before he was asked to resign in March.

Montgomery County public records indicate a case was filed by Assistant Chief Chuck Grant, who worked in technology, on Jan. 13 in the 284th Judicial District Court. The suit alleges Grant’s employment was terminated in December following a report to the district attorney’s office of misconduct surrounding the hiring and promotion of Elisa Noriega, assistant fire chief of the communications division.

In the defendants’ response filed with the court Feb. 5, Vincent and the MVFD denied the allegations. However, Riley confirmed March 16 the district attorney’s office is investigating the lawsuit’s claims.

The lawsuit sought the reinstatement of Grant’s employment and full compensation of the wages and benefits lost upon being terminated, among other items. It also alleged MVFD employees are concerned for their futures in the department due to the work environment.

“I had a lot of friends that were in [the department]. ... They would trust me with not selling them out because it was fear of reprisal,” said Buck Carraway, a former ESD 10 commissioner who served from 2016-18, meeting minutes show.

Carraway said he quit his role with ESD 10 due to concerns he expressed about spending not being addressed but claimed friends have told him of the toxic work environment.

“I heard it got worse after I was gone,” he said.

County records show Grant’s case was pending as of press time March 24. However, ESD 10 minutes from Feb. 22 show the district authorized negotiating a settlement with Grant.

Grant deferred questions to his attorney, who could not be reached for comment; however, Chief Jeff Hevey—who was hired March 18—said Grant began work March 22 as the assistant chief of safety and health.

However, Robinson said, as the department had outgrown its in-house information technology capabilities, the IT position was abolished. Minutes of the district’s Jan. 14 meeting show the board approved a contract with QZIP Technical Solutions for maintenance and improvement of IT infrastructure.

According to the MVFD bylaws outlined in the Jan. 13 suit, the fire chief has the “sole authority to appoint or remove any officer in the department, and to create or abolish any positions” in the department. 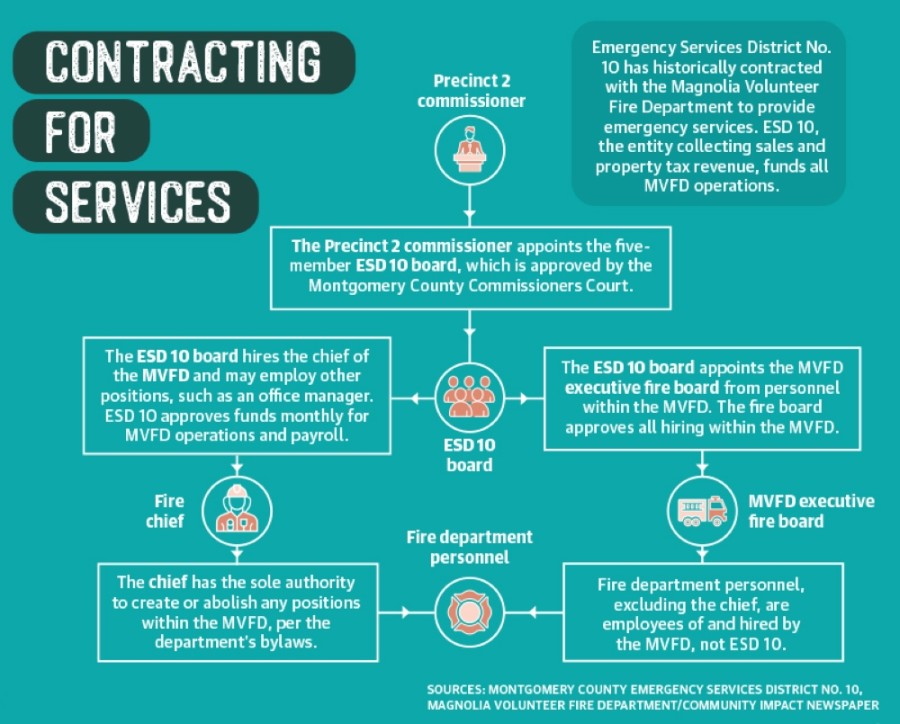 Because ESD 10 currently is not the direct employer of fire department personnel—excluding the fire chief—Robinson said hiring decisions are made by the MVFD executive board.

The suit alleges Noriega was hired with a salary of $123,000 and was promoted in November to assistant fire chief with a salary of $142,000 despite “minimal qualifications” and a recent criminal history, according to a Dec. 30 letter included in the case documents by Grant’s attorney.

Noriega’s experience listed on the MVFD website includes master’s degrees in business administration and public administration, which is pending.

Qualifications for membership into the MVFD—of which Noriega has been a member since 2019, per the MVFD website—state members must not have been convicted for any offense other than minor traffic violations within five years preceding the date of application for membership, per the department’s bylaws outlined in the Jan. 13 suit.

Harris County district clerk public records show Elisa M. Noriega pleaded guilty in January 2018 to a Class A misdemeanor charge of deadly conduct. Noriega could not be reached for comment.

In all but three Texas counties, county commissioners appoint a five-member board to govern ESDs, as defined in the Texas Health and Safety Code, said Cliff Avery, executive director of the Texas State Association of Fire and Emergency Districts. Avery said ESD commissioners are elected in Harris, Smith and Orange counties, as amended by the Texas Legislature.

In Magnolia, ESD commissioners then appoint the fire board, which selects fire department personnel, Robinson said.

“There’s a policy in Magnolia that you’re always hired at one rank below; you get a one-year evaluation, and at the end of that year, if your evaluation comes out positive ... then you are given your one-year promotion,” he said. “There’s some people that are administrative that hold the title of assistant chiefs and battalion chiefs, but they are not in suppression, and they are not in the stations.” 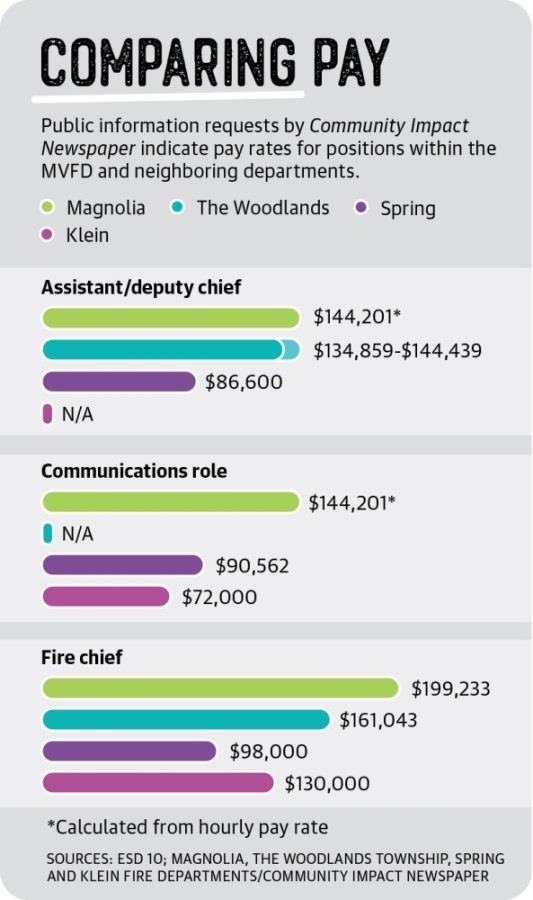 Robinson said Magnolia has raised its salaries in recent years to stay competitive with The Woodlands to retain firefighters.

Public information requests indicate MVFD assistant chiefs earn $144,201 based on 52 weeks of the 2021 hourly rate. In comparison, records show The Woodlands Fire Department does not have a communications position, but deputy chief salaries range from $134,859 to $144,439.

As residents called for better communication from both the fire board and ESD 10 in March meetings, ESD 10 members vowed to be more transparent and to correct issues related to allegations of misconduct. The new ESD board—Charles McDonald, Larry Smith, Heath Schultz, Kelly Violette and Jeff Cunningham—was appointed March 9.

“Give us a chance, and over the next few months, I promise you, you will see a difference in attitude and a difference in the way things work,” Smith said to the public March 9.

At the March 9 meeting, Conroe-based attorney Adam Dietrich was selected to investigate employment matters in the district and the MVFD.

Robinson said because the ESD meets monthly and cannot discuss issues with one another outside of the monthly meeting, the district’s timeline for addressing allegations was hamstrung. Robinson claimed he spoke to a few employees about the lawsuit’s allegations and was told they were false.

“I reported back to the board those facts, and we decided we need to go ahead and go further and start a formal investigation. At that meeting when we got together [in January], the DA’s office had started their own investigation,” Robinson said. “A lot of things changed for us legally once the DA started the investigation.”

On March 18, the ESD voted to start the process of terminating its contract with the MVFD, effective Jan. 1, 2022, as the district is required to give the MVFD 240-day notice of termination to avoid the multiyear contract renewing. However, the district could still decide to renegotiate the contract, ESD 10 general counsel John Peeler said.

Robinson said Peeler advised the district to consider becoming a direct provider of fire services as it had outgrown its contract with the MVFD.

“We informally informed the [fire] board that at our next meeting [in March], we were going to pass a motion and give them legal notification that we were opting out of the contract with them. We were going to dismantle the fire board, and we were going to become a direct provider,” Robinson said. “We were fired before we could.”