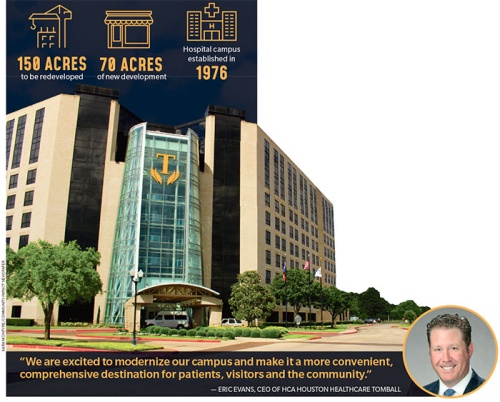 A project is in the works between HCA Houston Healthcare Tomball and NewQuest Properties to redesign the hospital campus to add medical office, retail and restaurant space.

Announced in an April 29 release, NewQuest officials said the project calls for redevelopment and expansion of the 150-acre hospital campus at 605 Holderrieth Blvd. with tentative plans for a new fitness facility, restaurants and retail. Mixed-use development—which could include commercial and multifamily spaces—is also proposed for the campus, said Ashley Strickland, NewQuest vice president and leader of NewQuest’s newly formed Healthcare and Wellness Real Estate Division.

“We’re seeing more of these health systems like HCA and their leaders putting a major emphasis on high-quality care but also more specifically [on] higher patient satisfaction,” she said.

While the project is in its early stages, parts of the redevelopment project could open as early as 2021, Strickland said.

“It’s more about the experiential campus versus just the traditional health care-driven campus,” she said.

HCA Houston Healthcare Tomball’s roots date back to 1948, when community members and the Humble Oil Company contributed funds to build Tomball’s first hospital at Hospital and Carrell streets. The present-day site was then established in 1976 with the opening of a 70-bed hospital to keep up with medical demands in the community, according to Lessie Upchurch’s book, “Welcome to Tomball.”

“When we owned the hospital [as the Tomball Hospital Authority], our board chair was Elmer Beckendorf, and he used to say he didn’t want to own all the land in Tomball. He just wanted to own the land that was next to the hospital with the eye of developing that campus into something that would be a true medical center,” said Lynn LeBouef, the CEO of the Tomball Regional Health Foundation and former CEO of the Tomball hospital from 2005-11. “It’s kind of heartwarming to see that somebody else has picked up that mantra and is acting on it.”

Evans said women’s services are also being expanded. A women’s specialty care pavilion on the Tomball campus as well as a women’s clinic in Magnolia are in the works, Evans said previously. In December, Millennium Physicians-Radiation & Diagnostic Center opened on the campus.

“We are excited to modernize our campus and make it a more convenient, comprehensive destination for patients, visitors and the community,” Evans said in the statement.

NewQuest has a listing and brokerage agreement with HCA, Strickland said, meaning the development company will provide advisory services ranging from master-planning to leasing assistance.

The northwest corner of the campus will include 12 acres for a blend of retail, restaurant and medical office buildings, Strickland said. The Texas Sports Medicine Center in the southwest corner of the campus will be repurposed into a state-of-the-art recreation and wellness center with a tenant announcement coming this summer, she said. The space will feature a gym, indoor pool, possible outdoor pool and outdoor activity area.

Proposed plans for the interior portion of the campus include mixed-use, medical and multifamily options.

“It’s in the heart of the campus, so we really want that piece to be special,” Strickland said. “We might just do one of those uses, or we may figure a blend of those uses.”

Stand-alone tenants will likely be scattered throughout the campus, totaling another 5-10 acres, and an additional 20-plus acres east of the hospital are reserved for a potential hospital expansion, she said.

“We’re looking at at least a year’s time if not more before you see the first opening of something, so likely an early 2021 start of openings, and then the project will continue to unfold from there,” Strickland said.

HCA Houston Healthcare Tomball serves the growing Tomball, Pinehurst and Magnolia areas, which saw more than 21,000 new residents from 2013-17, according to U.S. Census data for the six ZIP codes.

“We recognize the need to support the area’s continued growth by ensuring we are doing what we can [to] help attract business and the wonderful residents who choose to make Tomball their home,” Evans said in an email.
HCA officials would not provide the annual number of hospital patients by press time.

Strickland said the redevelopment project stems from demands for not only high-quality care, but also for patient satisfaction.

“It’s not just about the care; it’s about satisfaction and the experience. [Health care providers are] seeing needs to bring retail closer to their hospitals,” she said. “It’s just integral to have retail as a component of this piece.”

“Really a big component of heightening patient satisfaction and overall campus benefit is bringing in additional amenities and surrounding your hospital with a better environment,” Strickland said.

Dr. James Langabeer, a professor of management, policy and community health at the UTHealth School of Public Health, said health care nationally is becoming focused on meeting consumers where they are.

“We want things now, we want it easy, [and] we don’t want to wait. … When we refer to retailization, really it’s making [health care] much more accessible on consumers’ terms,” Langabeer said. “How we [as patients] measure satisfaction tends to be things like wait times and parking—they’re not things that are really measuring quality of care.”

Additionally, he said some hospitals may look to investment properties and other services to boost revenue.

“Especially the for-profit hospitals are trying to take a critical look at their facilities and asking, ‘What else can we do differently with this space?’” Langabeer said. “If you look at sources of revenue where people are actually making money at the hospital level, it tends to be on auxiliary-type things. It’s not necessarily on patient care—[it’s on] bookstores, cafeterias and parking.”

HCA officials would not comment on the project’s cost or how it could affect the hospital’s budget.

“From a health care management perspective, [hospitals are] looking to optimize space,” Langabeer said. “The real question [in optimizing space] is: How do we not lose or jeopardize critical community services that may not be accessed anyway else?”

“If you can have one area or one location that is really kind of set apart ... as it’s proposed, it’s really going to reinforce health is a priority,” Dyson said. “I think setting apart an area of our community, that’s going to help to influence behaviors in a very positive way.”

Accessibility to the medical corridor could be improved by the ongoing Medical Complex Drive extension project, which will stretch from Hwy. 249 east to FM 2920 once complete.

The most recent segment was completed from Lawrence to South Cherry streets in May 2016, while right of way acquisition is about 75% complete for an extension from South Persimmon Street to Hufsmith-Kohrville Road, Assistant City Manager David Esquivel said. The segment is estimated to total about $20 million, Community Impact Newspaper previously reported.

With the project announcement, this corridor is becoming a true commercial corridor—not just another thoroughfare, Esquivel said. As such, Esquivel said he envisions the proposed Tomball medical center drawing both new residents and new patients to the city.

“The hospital has always been a gem for us. Because of the health care that we have available here for the community, it attracts people from the whole region,” he said. “It really is a game-changer just wondering about the possibilities of what they’re going to do with the campus.”