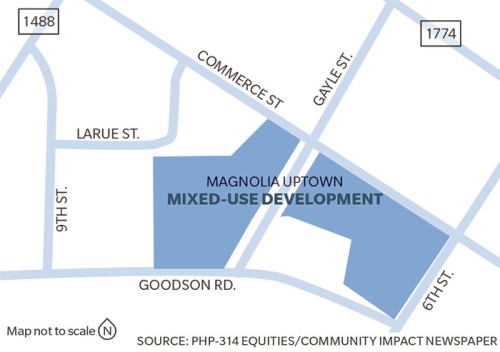 The city of Magnolia looks to welcome mixed-use development.

Magnolia City Council approved amending the city’s zoning districts and land-use regulation to allow for mixed-use commercial and residential projects during its May 8 meeting. Tana Ross, the city’s economic development coordinator and planning technician, said the move could drastically change the types of developments available within city limits.

Property management firm PHP-314 Equities entered a development agreement with the city in May. The firm is developing Magnolia’s first mid-rise mixed-use development to be located in downtown Magnolia on Commerce Street, developer Pauline Thude-Speckman said. The proposed site was obtained from Living Waters Assembly of God, located in Magnolia.

“The downtown mixed-use development coming to Magnolia will no doubt be a true catalyst for great change in the Town Center [and] Stroll Overlay districts of our city,” Ross said. “[The] connectivity to Unity Park would be a natural result of the [proposed] development.”

Magnolia Uptown, the unofficial name for the development, is a 2-acre, four-story development that will include one- and two-bedroom apartments with about 24,000 square feet of retail space beneath them, Thude-Speckman said. The design also includes enhancing Seventh Street—also called Gayle Street—into a pedestrian-only walkway. The proposed name, unit count and amenities are subject to change, Thude-Speckman said. However,construction is slated to begin in spring 2019.

“This development extends the opportunity for a work, live and play environment. Not only does this development promote economic development for the city; it also addresses the critical need for quality rental housing,” she said.

The city’s amendment will also allow the city to accept proposals for commercial and office mixed-use development, Ross said.