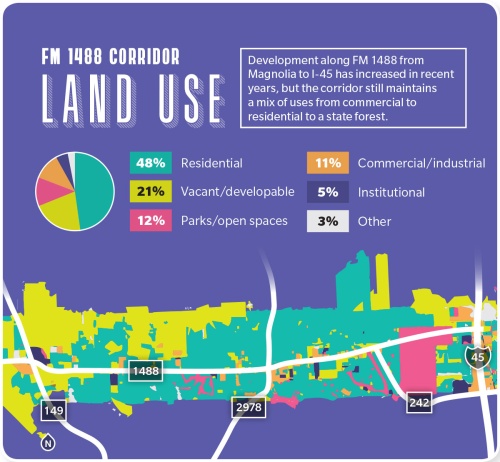 The Texas Department of Transportation is reviewing traffic, safety and mobility conditions along roughly 14 miles of FM 1488 as part of an ongoing study of the corridor stretching from FM 149 to I-45.

In The Woodlands area, FM 1488’s nearly 7 miles between I-45 and FM 2978 have grown busier and more hazardous, according to TxDOT data. That stretch of road contains over 100 access points, and some daily traffic counts there have risen by thousands of vehicles since 2010. Annual vehicle crash counts on that portion of the highway also increased 150% from 2010-18.

TxDOT has gathered input on the heavily trafficked FM 1488 from around The Woodlands area. Local residents, business owners and government representatives have all provided TxDOT with feedback about the highway, and it could see features such as new turn lanes, signals or bike and pedestrian paths as a result of the study.

“I think we understand that we’re not going to be able to stop progress, and we’re not going to be able to have any kind of an impact on the growth on [FM] 1488,” said Maryann Braid, the president of the Alden Bridge Village Association—a community located south of FM 1488. “I would just hope that as it gets more built up, that there are actions taken to try to increase safety and decrease accidents.”

TxDOT spokesperson Emily Black said the agency is examining FM 1488’s path from Magnolia through The Woodlands with a focus on safety and improving the often-congested traffic flow along the highway.

“The purpose of this access management study is to identify low-cost, high-impact treatments that reduce crashes and improve mobility with fewer conflict points, or areas where vehicles may cross paths, in the corridor,” Black said in an email.

TxDOT began its research in January and expects the analysis will take less than one year to complete, Black said. The study is budgeted at around $700,000 and will result in recommendations for short-, medium- and long-term improvements to the FM 1488 corridor. Short-term improvements could begin as early as fiscal year 2022 once construction funding is identified, Black said.

Possible projects could include the addition of dedicated turn lanes, traffic signal improvements, and new bicycle and pedestrian accommodations, Black said. At present, two key FM 1488 projects—the widening of 8 miles of the highway from four to six lanes and the installation of 12 miles of raised median west of I-45—are already in the works.

The estimated $5 million widening work is planned from I-45 to FM 2978 but does not yet have an expected start date, Black said. The median project has already received approximately $6.9 million in Highway Safety Improvement Program funding and is slated for construction in FY 2022.

“Safety funds are allocated based on a statewide competition,” Black said. “While obtaining the funds is a good thing, it also means that FM 1488 has a higher than average number of safety issues we can address.”

Before TxDOT began examining the regional FM 1488 corridor, area residents had noted the road’s ongoing transformation into one of the county’s busiest thoroughfares.

“We’ve seen it really, really take off in the past four to five years where a lot of the commercial and retail and restaurants and service businesses have started to move in,” said J.J. Hollie, the president and CEO of The Woodlands Area Chamber of Commerce. “It’s just reflective of the overall population growth in Montgomery County ... that we’ve seen in the past decade or so.”

Along FM 1488 and the county overall, population and commercial development jumped over the past decade. U.S. Census Bureau estimates for the 77354 and 77384 ZIP codes, which include most of the highway corridor, showed around a 5,000-person increase in each area’s population between 2010-17.

The variety of storefronts now on FM 1488 has also granted residents access to options and amenities that would have previously required travel farther from home, according to several The Woodlands-area residents. However, locals also feel crowding associated with becoming a more commercial- and population-dense area.

In comments solicited by Community Impact Newspaper on the social media site Nextdoor, dozens of The Woodlands- and Magnolia-area residents voiced concerns about FM 1488’s congestion, safety and image. Several residents compared the corridor’s development to FM 1960 in the Spring area and said they were dissatisfied for reasons ranging from deforestation and overdevelopment to increased commute lengths and dangerous drivers.

“The travel down [FM] 1488 from [FM] 2978 takes a long time, and I seem to catch every red light along the way. … I hate to see so much concrete and fewer and fewer trees,” Cimarron Country resident Miesha Boyd said in a Nextdoor comment.

Local officials have also focused on FM 1488 as more drivers travel the road. Daniel Zientek, a captain with the Montgomery County Precinct 3 constable’s office, said the most common violations encountered by patrols on FM 1488 north of The Woodlands are speeding violations and traffic accidents, frequently caused by distracted driving. He said patrols have also increasingly seen intoxicated drivers along the highway.

“In the past years, we have had many restaurants that have [a] sports bar theme or restaurants with bars in them. … This leads to an increase in drunk driving, which makes us focus our traffic and DWI efforts on the FM 1488 corridor along with other areas of [Precinct] 3 in south county that have drinking establishments,” Zientek said.

Despite those concerns, many of the corridor’s businesses have found success with local growth. Hollie said he believes store owners in the area remain generally satisfied with FM 1488’s consistent stream of potential customers and the mix of recreational, residential and retail space along the road.

“You’re not seeing one business or industry do well; they’re all doing very well,” Hollie said. “They seem to be very happy with their business traffic and the location.”

Vernon Veldekens, the founder of the Marcel Group real estate firm, had a similar outlook on the highway corridor. The firm brought two new shopping plazas to FM 1488 in the past two years: Marcel Commons at 2302 FM 1488 was completed in 2017, and Marcel Town Center at 545 Woodlands Square Blvd. opened in January. Veldekens said he believes business owners have been pleased with both retail spaces, which quickly filled with restaurants, gyms, health stores, boutiques and offices.

“We’re very happy with the activity that we’ve had there. So far, it’s been a really good response at both centers,” Veldekens said. “I think the community has embraced it, and I think our tenants are settling in well.”

As the TxDOT corridor study concludes in the coming months, the transportation agency will begin project planning and searching for funding ahead of a possible first round of construction in the early 2020s.

So far this year, TxDOT has solicited public input on access management priorities through a community meeting and an online survey. Black said TxDOT saw turnout of more than 100 attendees at its first public meeting, held in Alden Bridge in May, and it received 1,070 survey submissions online.

TxDOT plans to present its latest community-guided proposals concerning FM 1488 and accept further input at a second public session for the corridor study, which Black said will likely take place in September.

TxDOT is also planning for the future of several connected state roadways that could relieve problem spots along the corridor and throughout The Woodlands area, including expansions to FM 2978 and Hwy. 242 in The Woodlands.

The $24 million FM 2978 widening from two to four lanes north of Conroe-Huffsmith Road is under construction in two portions that could be completed in late 2020 and early 2021, and the $20 million Hwy. 242 widening from four to six lanes between FM 1488 and I-45 has an estimated fall 2022 completion date.

In addition to TxDOT’s FM 1488 assessment, the agency is in the midst of a Planning and Environmental Linkage Study of I-45 from Conroe to North Houston that will produce transportation recommendations covering the next several decades of development along the interstate. TxDOT will accept public input related to its project planning along I-45 on environmental, community and economic issues along the corridor through summer 2020.

The city of Conroe is also developing a north-south link from Old Conroe Road to Sgt. Ed Holcomb Boulevard South via a crossing of the West Fork San Jacinto River. City and state officials hope that project can bring relief to both I-45 and the FM 1488 corridor, much of which is covered by Conroe’s extraterritorial jurisdiction.

“I think the major concern—and I’m glad that TxDOT is looking at it—is how do you manage the traffic and the access in and out of those businesses while making it as safe as possible?” Hollie said of the FM 1488 corridor.