Initial proposals for $2.9 billion-$3.3 billion worth of long-term flood mitigation projects throughout the San Jacinto River watershed were outlined Aug. 13 by regional government and water management organizations in a virtual public meeting livestreamed on the San Jacinto Regional Watershed Master Drainage Plan website Aug. 13. Archives of the video are available on the site.

The flood prevention concepts, which do not yet have funding sources identified, were developed as part of the master drainage plan, a two-year, $2.7 million project launched in 2019 to examine flood hazards and plan for future flood mitigation in the nearly 2,200-square-mile watershed.

During flooding events, runoff from the watershed flows into Lake Houston and ultimately affects the surrounding region, officials said at the meeting.

Harris County Precinct 1 Commissioner Rodney Ellis opened the meeting by discussing the effects that the watershed plan and Harris County’s 2018 flood bond projects could have on lower-income and historically disadvantaged communities. Current planning efforts are designed to reflect communities most at risk during major weather events, rather than areas with high property values, as previous regional flood mitigation efforts had been.
RELATED STORIES

“After decades of neglect, lower-income areas and communities of color in flood-prone areas have been experiencing flooding of homes and streets with each high rain because these communities have been passed over for years due to an inequitable federal formula. That formula would prioritize flood mitigation projects based on property values, not people,” Ellis said. “With these guidelines, we are now able to prioritize areas that have a higher risk of loss of life due to disasters and take longer to recover from those disasters.”

Terry Barr, project director for the study’s engineering consultant team, presented several flood mitigation concepts in the categories of flood reduction, warning and response identified through the study so far. The proposals are designed to reduce the approximately $2 billion worth of flood damage projected to occur throughout the San Jacinto River watershed over the coming 50 years. 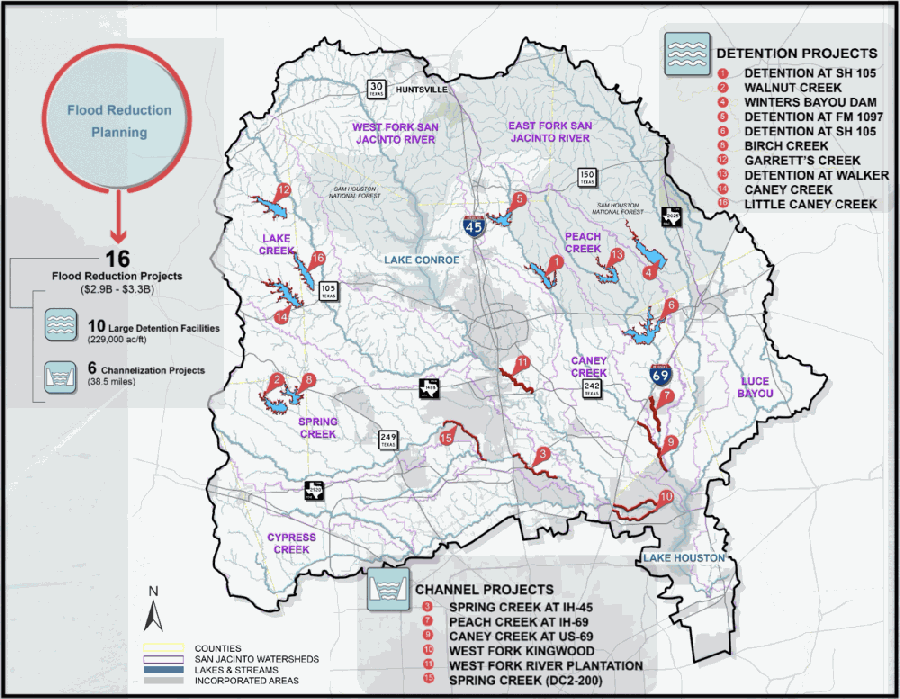 A total of 16 potential long-term detention projects and channel improvements were presented Aug. 13. The recommendations include creating around 229,000 acre-feet of detention space spread across 10 projects and more than 38 stream miles of channel improvements spread across six projects. Long-term projects are ones which would be designed and built more than five years in the future and carry an estimated cost of $2.9 billion to $3.3 billion, although funding would need to be secured through various means such as federal or state agencies, Barr said.

“While that is a high price tag, consider that the watershed covers a few thousand square miles and there is no single, simple solution that’s going to address flooding across the region,” Barr said. “A series of large-scale improvements is needed to reduce the risk.”

Barr said the 16 project proposals could result in a reduction of over 40% in damage from flooding events over a 50-year period. The projects could also lead to an increase in flood elevation along the region’s main evacuation routes, which would benefit area residents during major weather events, Barr said.

The study also recommended adding 26 water gauges to measure discharge, rainfall and waterway stage in the watershed at a cost of $250,000-$500,000. The instruments could improve response time for area residents and officials during major flooding events, Barr said.

Several short-term study proposals, which could be implemented within the next five years, were also shared during the presentation. Those include updating flood plain maps and developing smaller watershed plans for regional waterways; evaluating emergency management practices during major weather events; monitoring and removing sediment throughout the watershed; and continuing targeted home buyouts in the region’s most flood-prone areas.

“There are a lot of steps that can be implemented, or at least initiated, in the short term,” Barr said.

The next steps in the watershed program include continued planning, public input and securing of state and federal funds for future projects. More information on the San Jacinto River Regional Watershed Master Drainage Plan may be found at www.sanjacstudy.org.

Public comment on the plan is being gathering through Aug. 28 at https://publicinput.com/sanjacmasterplan and at the Harris County Flood Control District website.