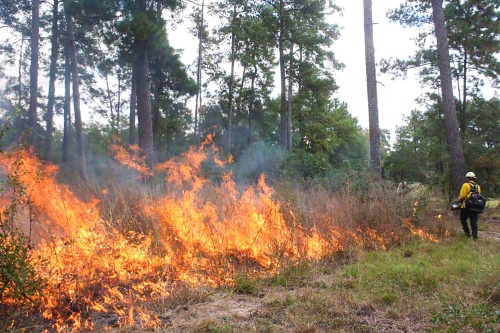 Prescribed burns are monitored by the forest service.u00a0 “That’s the biggest urban forest in the state of Texas, and it’s important that we protect it,” Toth said in a telephone interview. “I moved to The Woodlands back in 1997. ... It was majestic; it was beautiful; it was serene, and we’re losing that. We’re losing that because there’s this ever-increasing desire to clear-cut every single development that comes into The Woodlands, and it’s tragic. We’ve got to stop.”

Senate Bill 345 and House Bill 792 would solidify the forest management work of the Texas A&M Forest Service, which owns and operates the land, and prohibit alterations or damage to the area’s tree canopy coverage, air and water quality, and other resources.

SB 345 is the second such measure, following a 2017 bill filed by Creighton that failed to become law. Creighton’s initial proposal that year included a provision allowing development in the forest, sparking pushback from county residents. Creighton revised the bill to ban development in a draft closely resembling this year’s filing, but that bid stalled after its passage in the Senate.

“This is why people should get involved, and it was neat to see the people of The Woodlands and the surrounding area speak up two years ago when this issue came up,” Toth said. “This is government at its best, when it listens to people and people get involved and show their passion for something.”

Wes Moorehead, the department head of East Texas operations for the Texas A&M Forest Service, said the forest is an important area resource and he does not believe the bills would affect A&M’s work at Jones.

“It’ll probably be business as usual: continue to take care of the forest and continue to keep it in a way that people enjoy it. It’s such a magnet, because it’s a green space in a concrete jungle down there,” Moorehead said in a telephone interview. “We’ve managed that forest for just under 100 years now, and we’ve always managed it sustainably, conserving the forest resources. And the way this bill is written, it looks like it allows us to continue to do that.”

Ana Cosio, a resident of the Windsor Hills neighborhood that borders the state forest, spoke at a March meeting of The Woodlands Township board of directors supporting the bills and urging audience members to do the same. Cosio said she appreciates lawmakers’ efforts this session, and believes the bills are improvements over the 2017 proposal.

“I think this is a wonderful thing for the forest, and I’m hoping that we can get that land protected,” Cosio said in April. “I think everybody appreciates the forest. ... It’s called The Woodlands for something.”

In March, SB 345 passed through the Senate and was referred to the House Agriculture and Livestock Committee, where it was recommended for passage. HB 792 was reported out of the agricultural committee on April 9 and sent to House calendars on April 23. Toth said he remains confident the measure will make it through the Legislature this session.

“It’s cleared the hurdles in the House and the Senate, so we’re good,” he said.

Either bill would take effect Sept. 1 if enacted into law.