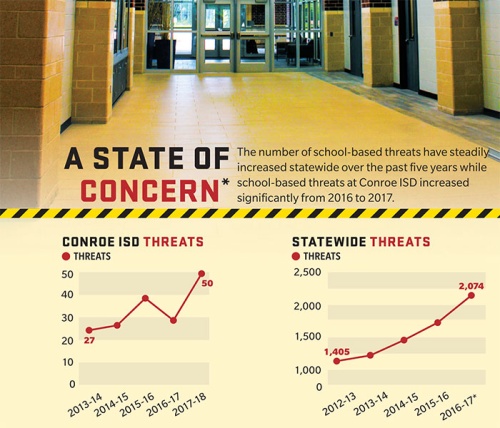 In light of school shootings and rising threats over the past year, state officials and local school districts like Conroe ISD are planning initiatives to improve school safety.

In May, Gov. Greg Abbott released his School and Firearm Safety Action Plan, in which he called for measures to keep students and faculty safe in light of recent active-shooter events.

CISD Superintendent Curtis Null said school safety is not a new conversation. CISD has been steadily adding security vestibules and funding technology upgrades since the 2008 school bond. More recently, the district has begun to increase its focus on mental health.

“Some people can get focused on safety and security, and they think it’s all about door locks and police officers, but that’s the end of the safety and security,” Null said. “It starts with this mental health and the culture and the environment that are established on campus. That’s where all that begins.”

LOCAL EFFORTS
During the 2016-17 school year, the TEA recorded the highest number of incidents of students reportedly bringing knives or firearms onto school property over the last six years. In CISD alone, there were 15 incidents of weapons being brought to a CISD campus in the 2017-18 school year—three of which were firearm violations, according to the CISD Police Department.

To help combat these threats, the CISD board of trustees allocated $1.2 million in the fiscal year 2018-19 budget—which was approved Aug. 21—to purchase 12 police vehicles and hire 16 additional police officers, who will be assigned to the elementary and intermediate campuses this year, CISD Police Chief Will Harness said.

Additionally, CISD has been upgrading its safety and security measures across its campuses by buying more security cameras and installing security vestibules. Currently, 57 of CISD's 63 campuses have secure vestibules. CISD is also encouraging more safety training for staff members and students to increase their awareness, Harness said.

“You have to look at a school campus from the outside parking lot in,” he said.

“With Anonymous Alerts, we recognize that kids text more than they talk. So far this year, since day one of school, we’ve received 35 text tips from Anonymous Alerts [as of Aug. 24],” Blakelock said.

MENTAL HEALTH INITIATIVES
Following the Santa Fe High School shooting in May, counselors and mental health care professionals were deployed to the high school to provide immediate and long-term care, according to the governor’s office. To provide help before incidents occur, CISD has begun work with health care organizations in Montgomery County to ensure students have access to mental health care.

In July, the CISD board of trustees approved an interlocal agreement with Tri-County Behavioral Healthcare, an organization that serves children and adults suffering from mental health disorders in Montgomery, Liberty and Walker counties. In a pilot program for the 2018-19 school year, the organization is providing mental health services to students at Armstrong Elementary and Grangerland Intermediate schools.

“We have master's-level case workers in the schools, and we also have a licensed therapist that goes between the two schools that does therapy and intakes,” said Evan Roberson, executive director of Tri-County Behavioral Healthcare. “That’s the model we started with and then see how it goes. The demand has already been high at those two schools, and parents have been asking about it and how to get in.”

Roberson said if Tri-County and the other partnering entities can keep the pilot financially stable, he would like to move to other schools around the district and provide a medical health clinic to all students in the future. Current funding for the pilot program is covered by grant funding through Tri-County at no cost to CISD.

“CISD really has a lot more resources than most of the schools we interact with,” Roberson said. “They have a large number of counselors, they have a specific group that does crisis intervention, and they have a lot more support than some of the other school districts. We think that’s great, and you almost can’t have too much support.”

CISD also budgeted roughly $485,000 to hire five campus counselors and a mental health specialist for the 2018-19 school year. Denise Cipolla, administrative coordinator of guidance and counseling for the district, said the counselors were assigned to York, Knox and Irons junior high schools as well as Wilkerson and Cryar intermediate schools.

FINDING SOLUTIONS
At the state level, lawmakers are working on school safety solutions that can be implemented statewide. Shortly after Abbott released his School and Firearm Safety Action Plan, Lt. Gov. Dan Patrick appointed the Senate Select Committee on Violence in Schools and School Security to examine different aspects of school safety and security. After four public hearings, the committee released a report in August and offered numerous recommendations on how the Legislature can address and improve school security.

Some of the recommendations include providing school districts with funding to enhance physical aspects of schools—such as additional metal detectors; providing school districts with funding for additional security personnel; and finding methods to increase the availability of school counselors, social workers and licensed specialists in school psychology in schools.

Most of the recommendations call for the Legislature to consider bills that would allocate additional funding to school districts.

However, in recent years, many school districts—including CISD—have seen the state’s share of their total revenue decrease. In FY 2017-18, the district received less than $100 million from the state, which equated to less than 25 percent of the total budget, according to district officials.

Abbott’s plan includes recommendations for school safety bills to be enacted once the Texas Legislature reconvenes in January.

As legislators continue to discuss the future of school security improvements and funding, Null said he hopes they will allow school districts and boards of trustees to have localized control to decide where funds need to be funneled.

“If you’re going to give us funds for increased safety, allow us to use those on mental health. Allow us to make the decision of, ‘Are we buying more hardware with this money, or are we hiring more counselors with this money?’” Null said. “That should be our decision to make because it’s all on the same continuum."
SHARE THIS STORY